LONDON (REUTERS) - Tottenham Hotspur won 17 of their 19 Premier League games at White Hart Lane last season but have yet to take maximum points in three matches at their new Wembley home.

Spurs manager Mauricio Pochettino said they were "unlucky" not to beat Swansea on Saturday (Sept 16) after the Welsh side held them to a goalless draw.

The result follows a defeat by Chelsea and a 1-1 draw with Burnley.

"Very disappointing because we did everything to win," said Pochettino.

"We created chances and dominated the game but were a little unlucky.

"I am happy with the performance although it is another game we draw here at Wembley and that is no good."

The statistics bore out his assessment with Spurs mounting 26 shots on goal and enjoying 75 per cent possession. Harry Kane hit the bar and was also denied by a one-handed save by former Arsenal keeper Lukasz Fabianski, who miraculously kept out the striker's flicked header from a corner at the near post.

Pochettino complained that Spurs should have had a late penalty when Serge Aurier tumbled under a challenge by Jordan Ayew but referee Mike Dean blew for handball by the Ivorian. 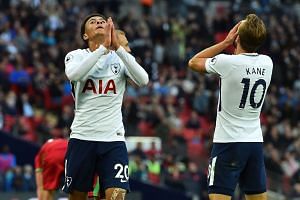 "It is so clear. What is not clear is why Mike Dean... (claimed)... it was handball (when) it was not a handball," said Pochettino.

"If you are not sure about the situation then why say it was handball? It was unlucky but we need to look at ourselves and try to be better next time and score before this situation."

Swansea manager Paul Clement praised his side who he felt may have provided the template for visiting teams at Wembley.

"I am very proud of the players and the effort they put in to get the result," said Clement.

"I said to be confident in your defending and if you do that, and are nice and compact, you can get a result here."

Clement replaced new midfielder Renato Sanches with Leroy Fer after 58 minutes in a game where Swansea's cautious approach was never going to see the Bayern Munich loan signing at his best.

"Sanches is rebuilding confidence after a turbulent year at Bayern," said Clement.

"We knew he wouldn't be lighting things up straight away here, he is getting used to the pace of the Premier League. It takes a bit of time to get up to speed."