Fans of Spanish football in Singapore are set to be disappointed, with the upcoming Primera Liga season unlikely to be shown on local television channels.

This comes after beIN Sports, a Qatari-owned media company, secured the league's regional broadcast rights to territories such as Indonesia, Thailand, the Philippines and Singapore.

However, the network - formerly known as Al Jazeera Sport - does not have a channel in the Republic. It has yet to strike deals with local telcos StarHub and Singtel to screen matches on their respective platforms.

Said StarHub's head of media business unit Lee Soo Hui: "We are in constant engagement with our content partners to add quality sports content to our programming... Our customers are our top priority and we will only acquire content sensibly to ensure good value for them."

On whether it is in negotiations with beIN, Singtel replied: "Fox International Channels has not succeeded in renewing their rights to La Liga, so this will not be available on Fox Sports, which is carried by Singtel TV." 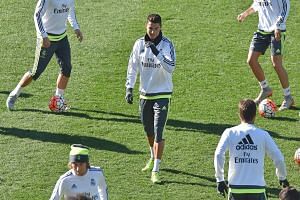 The new season kicked off this morning with Europa League winners Sevilla taking on Malaga while defending champions Barcelona will play Athletic Bilbao on Monday.

Featuring the likes of Real Madrid and Barcelona - the top two richest clubs on Forbes' list - and some of the world's best players such as Cristiano Ronaldo and Lionel Messi, La Liga has proven to be a hit with local fans.

Said student Karthik Kahleichelvam, 21: "La Liga is one of the best leagues in Europe and it's a shame that I'll have to settle for live streaming on the Internet."

However, it is understood that the clubs are not allowed to show live matches on their official online TV channels since this would contravene the agreements reached with broadcasters.

A version of this article appeared in the print edition of The Straits Times on August 22, 2015, with the headline 'No deals yet to show La Liga matches on TV here'. Subscribe
Topics:
More
Whatsapp Linkedin FB Messenger Telegram Reddit WeChat Pinterest Print Purchase Article Copy permalink