SINGAPORE - Every new ball at a World Cup strives to be the ultimate sphere and it is a never-ending quest for perfection for German sportswear giant Adidas, who have been the official match ball sponsor for football's showpiece event since 1970.

The Straits Times looks at the different match balls and how the design has come full circle for Russia 2018 with the Telstar 18, which Fifa unveiled on Thursday (Nov 10). The world football governing body has termed it "a reinvention of a classic model with a brand new panel design and the latest technology". 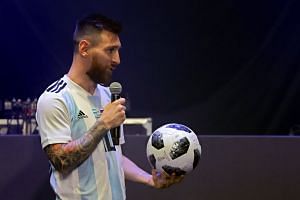 The Telstar, or more popularly known as the Buckminster, was the first made-for-television ball that was primarily designed with the watching audience in mind with its 32 panels. Twelve were black to make the ball stand out for live broadcasting.

The look of the quintessential match ball most known to football fans was created by Danish designer Eigil Nielsen, who drew inspiration from American architect Buckminster Fuller, hence its nickname.

Minor tweaks were made to the 1970 Telstar match ball as two balls were used at the event - the Telstar Durlast and the all-white Chile Durlast. The leather ball was coated with polyurethane to make it more waterproof while giving it protection from wear and tear. The gold Adidas lettering was also replaced with black.

The Tango Durlast set a precedent with its 20-panel design and iconic "triads" that gave the impression of 12 circles. The next five World Cup balls took their cue from it.

At £50 (S$89), a king's ransom in the 70s, it was the most expensive ball in history then due to its enhanced water-resistant qualities and leather material.

The last World Cup ball to be made of leather, the Tango Espana was next incarnation of the Tango Durlast and supposedly had even better water-resistant qualities with its rubberised seams.

But, to the consternation of players, coaches, officials and fans alike, the ball had to be replaced several times after its rubber inlays wore off from repeated kicking and was an unmitigated disaster at the tournament.

The first fully synthetic match ball to be used at a World Cup, the Azteca's design was derived from Mexico's Aztec architecture and history.

The polyurethane-coated ball was fully waterproof, hand sewn and unlike its predecessor, a success as Diego Maradona led Argentina to victory.

The Etrusco was the tournament's second fully synthetic match ball - but the first with an internal layer of black polyurethane foam - and like the Azetca before it, was designed and named with the host country's history in mind.

Adidas paid homage to the ancient Etruscan civilisation with three Etruscan lion heads decorating each of the ball's "triads".

The Questra was a boon for strikers but a bane for goalkeepers at the first World Cup held in the US. It was covered in a layer of polystyrene foam, which not only led to improved waterproofing but enabled the ball to travel at a quicker speed.

This was the first World Cup ball to move away from the traditional black-and-white design pattern with the Tricolore based on the blue, red and white of the French flag.

As the inaugural coloured ball, it was made using underglass print technology with a thin layer of syntactic foam which Adidas then claimed it meant "better compression and more explosive rebound characteristics".

Fevernova was the ball for the first co-hosted World Cup. Its improved syntactic foam layer, according to Fifa, ensured it would make for a "more precise flight path, and had additional cushioning for enhanced control and accuracy".

That claim, however, did not hold up on the pitch as the ball was deemed too light by players and coaches. Interestingly, there were notable upsets at the tournament, with France, Argentina, Portugal, Spain and Italy all making premature exits.

Adidas came up with the Teamgeist, a radical design that featured the German flag colours and which cut down on the number of panel touch points, resulting in a smooth and perfect exterior that supposedly improved accuracy and control.

With just 14 panels, it was meant to perform more uniformly but Brazilian left-back Roberto Carlos and England goalkeeper Paul Robinson savaged the Teamgeist, saying the ball felt too light and that it took on different properties in wet-weather conditions.

While the balls at the two previous World Cups had their fair share of critics, Adidas hit its nadir with the infamous Jabulani.

According to Adidas, the Jabulani featured a "new grip and groove ball technology that provided players a ball with exceptionally stable flight and perfect grip under all conditions, and with eight thermally bonded 3D panels that were spherically moulded for the first time, it was more round and accurate than any of its predecessors".

That boast backfired as Spain goalkeeper Iker Casillas labelled it a "beach ball" while Brazil custodian Julio Cesar called it a "supermarket ball". England coach Fabio Capello weighed in, calling the Jabulani "the worst ball ever" and former Liverpool midfielder Craig Johnston said: "Whoever is responsible for this should be taken out and shot for crimes against football."

The Brazuca was Adidas' "most tested", high-tech ball. With six panels, the fewest used in a football, the Brazuca was the direct response to the Jabulani's biggest fault, its flight unpredictability.

And the ball stood up at the last World Cup in fluctuating conditions, with Argentina talisman Lionel Messi and Brazil right-back Dani Alves calling it "great" and "fantastic".