"I read the news this morning," Klishina told reporters on Tuesday (June 21) after winning the Russian national championship in Cheboksary with a 6.84-metre jump.

"I was not only happy for myself but for the other athletes who will be able to compete at the Olympics in spite of this situation." 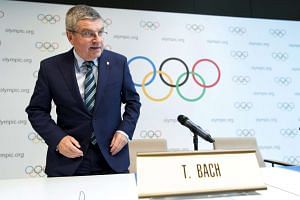 Klishina hopes she could be eligible to compete at the Games after the IAAF left the door slightly ajar for clean Russian athletes based abroad to compete in Rio, despite having unanimously voted last week to uphold the country's suspension, first imposed in November.

Klishina said she was still unclear on which procedures she needed to complete to apply for a chance to compete in Rio, but said her coach and agent would look into it.

The head of Russia's athletics federation, Dmitry Shlyakhtin, said on Monday (June 20) that the IAAF could allow Klishina to compete in Rio as a neutral given that she is based abroad full-time.

The 25-year-old athlete, a two-time European indoor champion, said that her preparation for Rio had been hindered by the IAAF suspension over evidence of state-sponsored doping and mass corruption in Russian athletics.

Since then, Russian athletes have been barred from taking part in international track and field meets alongside the world's best.

"When you don't feel this competition, it's very difficult," she said. "We can say that they are letting us compete without preparation for the Olympic Games."

Klishina said she was flying to the United States later this week to resume her pre-Olympic preparation at the prestigious IMG Academy, which is known for producing elite golfers and tennis players.

Klishina deplored that international sports bodies had been slow to establish criteria allowing clean Russian athletes to compete in Rio.