SINGAPORE - The dispute between national marathoners Soh Rui Yong and Ashley Liew has taken yet another turn, with the latter filing a request to the courts on Tuesday (June 18).

Besides seeking damages and compensation for legal costs, Liew, a chiropractor, has asked the court for an order to restrain Soh from making any further statements and to compel him to remove the statements that have already been published.

Liew, 32, has also requested the court compel Soh, 27, to publicly retract his statements and make a public apology.

This comes after Soh's refusal to meet the demands of a cease-and-desist letter issued by Liew's lawyer Mark Teng of That.Legal LLC on April 9.

Teng sent another letter on May 10 detailing his client's defamation claim.

The court documents, seen by The Straits Times, noted how Soh's actions are "malicious, reckless and calculated specifically to publicise the dispute, his defamatory material, and, in doing so, maximise the damage that he would inflict on the Plaintiff using social and mainstream media". 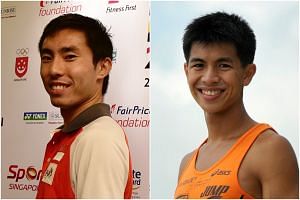 Last October, Soh disputed Liew's account of events at the 2015 race in Singapore, for which the latter was given a special award for sportsmanship by the SNOC and the Pierre de Coubertin World Fair Play Trophy by the International Fair Play Committee (CIFP) in 2016.

During the segment of the marathon at East Coast Park on June 7, 2015, Liew had reportedly found himself with a 50m lead after 12 other runners missed a U-turn and took the wrong route.

But, instead of capitalising, he slowed down to let his rivals catch up.

Liew eventually finished eighth in the event which Soh won.

In a statement on Tuesday, Liew said: "I wake up every morning striving to be the best that I can be. I hold the values of honesty and integrity in high regard. Soh's actions on social media have caused Singaporeans to question my integrity, and that crosses the line.

"Soh's false statements and aggravating comments have not only hurt my feelings but also disparaged my reputation.

"In light of the foregoing, I feel that I have no choice but to ask the Court to vindicate my reputation."

Asked by ST to comment on Liew taking the dispute to court, Soh, a business development executive, responded: "I feel sorry for Ashley that he's continuing to waste time defending this story rather than focusing all this time and energy on training to become a better athlete instead.

"That being said, this going to court is good, as the truth will finally see the light of day. I'll continue to maintain the truth of what I saw that day. I speak the truth and hence have nothing to fear."