He may have won Singapore's first Olympic gold medal in the 100m butterfly last August, beating Michael Phelps and other swimming heavyweights .

But Joseph Schooling, 21, said his parents deserve to be The Straits Times Singaporean of the Year 2016, an award supported by bank UBS Singapore.

"Without their help, their love, their contributions, I would not be where I am today. So mum and dad, thank you," said Schooling in a video message aired at the award ceremony. He was unable to attend due to school and training commitments in the United States.

He said his parents - Colin, 69, and May, 61, - supported his dream of being an Olympic champion from when he was six years old. BRINGING A NATION TOGETHER

(The Schoolings) chased an extraordinary dream and brought all of Singapore together for a stunning moment of pride and joy.

The family has spent years apart. Joseph was 14 years old when he first relocated to the US to enrol in the renowned Bolles School.

They had to weather incredible challenges like the fiasco at the 2012 London Olympics when a last-minute change in equipment resulted in Schooling finishing last in the 200m men's butterfly heats.

But Schooling's father, a businessman, and his mother, a chartered accountant, always believed their son would be an Olympic champion.

At the ceremony yesterday, Mrs Schooling described their Olympic journey as an enjoyable "roller- coaster ride".

"Being separated as a family (during the years when Joseph was training) was tough. But Joseph was so dedicated, so focused; he believed in himself, we supported him and he just did what he had to do."

She said the family is planning to donate the cash prize of $20,000 to young people. "We haven't decided where yet, it could be an education fund or something like that... Joseph has this soft spot for children, and we hope to give them a chance to start off better in life."

May Schooling's advice to parents

ST editor Warren Fernandez said the judges recognised Schooling's Olympic triumph would not have been possible without the sacrifices made by the whole family.

"They believed in the seemingly impossible Olympic dream that Joseph conceived when he was just six years old," he said. 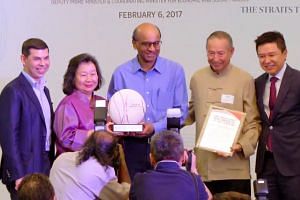 ST Singaporean of the Year 2016: When a nation's heroes gather together 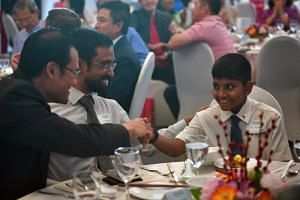 In Pictures: The ST Singaporean of the Year award 2016 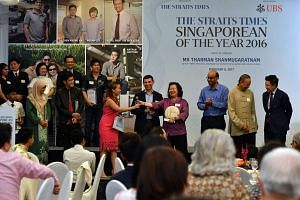 Strong nominees made it hard to choose

Schooling family named The Straits Times Singaporean of the Year 2016 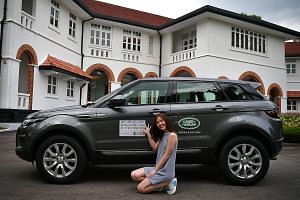 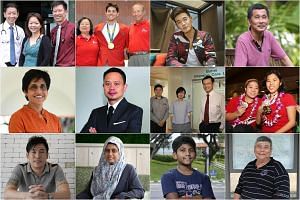 Who will be ST Singaporean of the Year?

UBS Singapore country head Edmund Koh said the Schoolings "chased an extraordinary dream and brought all of Singapore together for a stunning moment of pride and joy".

He described the award as unique in how it "celebrates the triumph of the human spirit and honours 12 deserving finalists and groups of finalists who have gone above and beyond their call of duty to make a difference to society."

Last year's winner, saleswoman Noriza A. Mansor, 51, met this year's finalists at the ceremony. Madam Noriza, who won hearts when she helped an elderly man who had soiled himself in public, praised all the finalists.

On the Schoolings' win, she said: "I hope this will encourage more Singaporeans to be athletes, to be winners for Singapore."

Among the 12 groups of finalists was student Megan Loy, 20, who suffered severe burns in a water park blast in Taiwan in 2015.

She was nominated - along with her doctors Associate Professor Tan Bien Keem and Dr Chew Khong Yik - for her resilience.

Said Ms Loy, a first-year undergraduate at the National University of Singapore's Yong Loo Lin School of Medicine: "Despite everything (the other finalists) have achieved, they are still very humble, down-to-earth, and friendly... They are all just like you and me.

"It just goes to show that you can achieve great things, as long as you put your mind to it."

Dr Chi Wei Ming, another finalist, was nominated along with fellow general practitioners, Dr Tan May Yen and Dr Lim Chien Chuan, for raising the alert on local transmission of the Zika virus in Singapore.

They alerted the Ministry of Health after noticing a spike in patient numbers in the second week of August last year.

Dr Chi, 48, said: "Some of them (the finalists) have gone through a lot just to get here... It's always good to hear about inspiring stories in Singapore."

The award ceremony also led to an unexpected reunion for two friends, and finalists, who had not seen each other for about 30 years.

Mr Shu gave a former offender $6,000 about three years ago to go back to school.

The two men have exchanged numbers and promised to meet up.

The food at the award ceremony was prepared by executive chef Teo Yeow Siang and his colleagues from catering company Lavish Dine Catering.

Mr Teo is an award winner too having led a team of six to clinch a historic victory for Singapore at the Culinary Olympics in Germany last October.

A version of this article appeared in the print edition of The Straits Times on February 07, 2017, with the headline ''Without their help, love and contributions, I would not be where I am today''. Subscribe
Topics:
More
Whatsapp Linkedin FB Messenger Telegram Reddit WeChat Pinterest Print Purchase Article Copy permalink