Like centenarian Lim Siew Eng, 103, her son, Ng Tian Song, 85, has grey hair, and the pair use walkers to move around their Bedok North flat.

Madam Lim has other ailments - she has cataract and can see only shadows. She also frequently complains that her bones ache.

She is among a growing pool of centenarians in Singapore, whose numbers have jumped from 50 in 1990 to some 1,200 last year, thanks to longer healthy life expectancy, among other reasons.

To help them better enjoy their golden years, the Pioneer Generation Office (PGO) has been keeping the centenarians on its radar.

PGO ambassadors - who are volunteers - have visited the centenarians at least once a year and engaged 708 of them since PGO's inception in August 2014. Of the group, about 77 per cent are women.

The PGO began with explaining the benefits of the Pioneer Generation Package to citizens born on or before Dec 31, 1949. It now shares about senior-related support schemes, health services and community activities to all aged 65 and above, including centenarians and their caregivers.

Madam Lim and her son are each receiving a monthly payout of $100 under the Pioneer Generation Disability Assistance Scheme, as well as a top-up of $800 in their Medisave accounts each year. 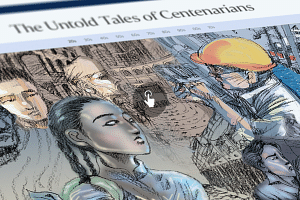 100 years of Singapore through centenarians' eyes

During visits by the PGO ambassadors, the elderly are also told about schemes like the Seniors' Mobility and Enabling Fund, giving them access to assistive devices such as walking aids.

PGO programme director David Neo said that centenarians are more prone to having sight and hearing problems, which reduces their quality of life, and are usually cared for by their children.

PGO ambassador Toh Eng Geok, 57, a former saleswoman who visits Madam Lim, said conversation with centenarians should not be too superficial.

Ms Toh added: "It helps to have an understanding of what life was like in the past. When I chat with them, I ask them whether they used to rear pigs and grow their own vegetables during the earlier decades when they lived in kampungs."

Madam Lim, who can still tie her own hair and wipe her face, said she misses being agile, mobile and productive. On living beyond 100, she said: "No one talks to me, the young ones just walk by me. My body aches. I wish I could do more."

Heritage expert and law professor Kevin Tan said it is remarkable that Singapore has many centenarians who may not be public figures but have interesting stories showcasing a different facet of Singapore's history that might not otherwise be captured in standard textbooks.

"No one will talk about these stories. So, all the more, they must be recorded because collectively, they are part of the Singapore story."