SINGAPORE - Train stations on the East-West Line that have affected by rail renewal projects will no longer be closing earlier from next Thursday (Sept 1), SMRT said.

Early closure of the stations between Tanah Merah and Pasir Ris, and between Joo Koon and Jurong East will be lifted then.

The revised timings for last trains on the East-West Line from Sept 1 are as follows:

"SMRT has been making good progress on all its rail renewal projects," it said in a statement on Saturday. 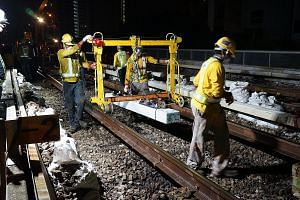 "We would like to thank commuters and residents for their patience and understanding in bearing with some inconveniences as we work hard to renew the ageing NSEWL network," SMRT Trains Managing Director, Mr Lee Ling Wee, said.

"As a result of the good progress made by our engineers over the past few months, we no longer require the planned last phase of early closure of stations."