Undergraduates and teachers, along with private-hire car passengers, will find it harder to smoke, under new restrictions taking effect from Sunday.

The National Environment Agency (NEA) announced yesterday that smoking will be banned in the outdoor areas of universities, and within the compounds of private education institutions.

It will be limited to designated smoking areas in universities and private education institutions where degrees are offered.

Smoking will also be banned within 5m of the compounds of schools such as pre-schools, madrasahs, junior colleges and polytechnics. 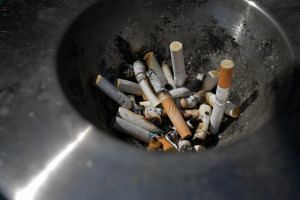 Additionally, smokers will not be able to light up in excursion buses, trishaws and private-hire cars used by firms such as Grab and Uber. This includes ride-sharing services such as GrabShare and UberPool.

The move is an extension of the Smoking (Prohibition in Certain Places) Act, which aims to reduce the exposure of the public to second-hand smoke. After the extension, there will be more than 32,000 places where smoking is banned.

Checks by The Straits Times found that many of the universities here already have no-smoking policies in place.

"Staff and students caught smoking outside the designated areas... could be served with letters of warning and/or counselling," he said.

About 10 students have been caught, he added, but there are no figures for staff.

A spokesman for the National University of Singapore said that the university has had a smoke-free campus since 1998.

Building manager Romi Sofhian Mohd Taib, who goes through about one pack of cigarettes daily, said he supports the ban because he is a responsible smoker who already avoids crowded areas when he smokes.

However, the 38-year-old hopes that the ban extension does not go too far. He was reacting to online comments that called for smoking to be banned even within individual homes.

The NEA has been expanding the list of smoke-free places covered under the Act, in consultation with members of the public and stakeholders.

The agency said yesterday that it will "take an advisory approach" in the first three months after the ban takes effect in order to give the public time to adapt, and will verbally warn those caught smoking in the prohibited areas.

However, it may issue fines to those who carry on smoking despite prior warnings.

From Jan 1 next year, the NEA will take enforcement action against all who are caught smoking in the newly prohibited areas.

"No Smoking" signs will be set up in these new places, and bins with ashtrays will either be moved to new locations or be replaced with those that do not have ashtrays.

Last year, about 19,000 tickets were issued to people caught smoking in prohibited areas.