Singaporeans continue to view family as the most important personal value, even as more are taking humour and fun seriously, a survey has found.

Results of the third National Values Assessment survey published yesterday show that family was cited most frequently as an important attribute to Singaporeans personally, just like in the previous surveys conducted in 2015 and 2012.

The latest survey results also had humour and fun making it to the list of top 10 personal values for the first time.

The findings were made known during an Institute of Policy Studies (IPS) roundtable discussion and media briefing yesterday at the National University of Singapore's (NUS) Bukit Timah campus.

In the study conducted between March and May this year, 2,000 Singaporeans were asked to pick out 10 words from a list of values, beliefs and behaviours that best describe themselves, Singapore society currently and their notion of the ideal Singapore society.

Besides humour and fun, Singaporeans picked health, compassion, honesty and family, among others, as values and behaviours that best describe them, suggesting an increased importance placed on their personal well-being.

NUS sociologist Tan Ern Ser said that Singapore's pace of life can be stressful and the constant quest for excellence could be nudging Singaporeans to place greater importance on humour and fun.

Ms Sharul Channa, a stand-up comedian of more than eight years, said that the increased value Singaporeans place on humour and fun does not surprise her.

"As our society grows, we have more expectations of ourselves and of the system. The cost of living is going up, and I think our society is realising that it is important to laugh and let off some steam," she said.

"I feel that it is a response to external pressures, and Singaporeans just need an outlet, which is humour and having fun."

The survey also found that Singaporeans consider close connections and relationships as important, as they selected values such as family, friendship, caring and compassion to describe qualities that best describe themselves.

But when asked how they view their fellow residents here, the results indicate a dissonance between what Singaporeans see as their own personal values and those of society's, which they suggested in the survey were largely kiasu (Hokkien for afraid to lose), complaining and competitive.

Reflecting on this, Dr Gillian Koh, IPS' deputy director for research, told The Straits Times: "When people step out of the door in the morning, when they get to their workplaces or their schools, or whatever it is, it sounds like they have to put on a different persona."

This, Dr Koh added, stems from how some Singaporeans feel that the way their life is structured makes it difficult to exercise their personal values outside of their homes and in society.

Being kiasu, complaining and competitive were among the seven "potentially limiting" attributes that aAdvantage and Barrett Values Centre identified in Singaporeans' perceptions of their society that could be harmful in excess.

Complaining was a new value added into this year's study, but the attributes of kiasu, competi-tiveness, materialistic, blame, kiasi (Hokkien for afraid to die) and self-centredness were all present in the 2015 survey.

Associate Professor Tan said: "While basic needs will always be important, it is heartening the survey provides evidence that Singaporeans do want our society to be defined by higher order values like compassion and respect.

"We need mutual support and a strong sense of solidarity to overcome the more negative values like complaining, kiasu and kiasi found in our current culture that are barriers to that aspiration." 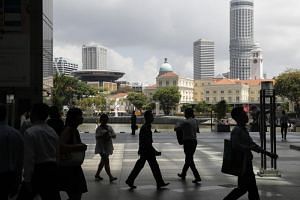 Does life get better after 50?

While many attributes have remained unchanged over the years, the surveys also reflect the top concerns of the day. Asked about how they perceive the society around them, Singaporeans in 2012 had flagged elitism; in 2015 they mentioned educational opportunities, while this year, they talked about care for the elderly.

When asked to indicate what they desire of Singapore society, effective healthcare was found to remain a priority for Singaporeans in society today, alongside affordable housing as well as care for the elderly and disadvantaged.

There were three new additions to the list of top 10 desired values that were not in the 2015 list: dependable public services, educational opportunities and respect.