SINGAPORE - The Republic’s population grew at a slower pace in the last five years compared with the same period before it, even as total population hit a record 5.7 million this June.

But the encouraging figures on citizen marriages and births across a similar time period give hope that the declining trend can be halted, experts said when commenting on the trends in the new population figures released on Wednesday (Sept 25).

They added that an important task in the years ahead would be to encourage people aged between 25 and 29 to get hitched and start families.

The latest annual Population In Brief report shows total population expanded by 1.2 per cent from June last year to June this year, compared with 0.5 per cent before.

Citizens accounted for 3.5 million of the 5.7 million, while the rest were made up of permanent residents (PRs) and non-residents who include foreigners who work here and international students.

The growth in non-resident population at 2 per cent outstripped that of the citizen population at 0.8 per cent. This was due to a rise in foreign employment, by 22,000, mainly in the services and construction sectors. 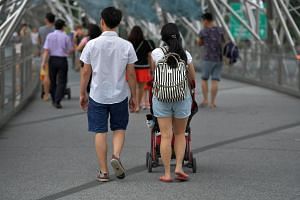 Most couples in Singapore not aware of fertility issues; 7 in 10 believe assisted reproduction is a 'magic bullet'

Singapore's fertility rate down as number of singles goes up

Despite the 1.2 per cent rise in the overall population, it was not enough to lift the overall growth rate of the past five years.

But in the last five years, Singaporeans had more babies on average that the previous five years.

At the same time, more Singaporeans were tying the knot.

Experts say this is an encouraging trend and whether it can be sustained will hinge on creating an environment that will coax young people to get married.

This is especially so for those aged between 25 and 29, known as the echo boomers as they are the children of the post-war baby boomers.

Singapore Management University sociologist Paulin Straughan said: “In the next five years we have to do whatever possible to encourage them to cross the marital status barrier.

“If we succeed, we will have another echo. But if we miss, the proportion of young persons would shrink and we will be in trouble.”

She added that while pro-family government policies are in place, more can be done to help single young working people focus on nurturing relationships.

“So when we talk about work-life balance, it’s not just for those with young children. We shouldn’t expect people to work extra when they are young and single.”

Meanwhile, Singapore continues to age. The proportion of working-age citizens has shrunk while that of the greying pool has expanded.

For those aged 65 and older, the corresponding figures are 16 per cent and 9.9 per cent.

Immigration has helped to moderate the impact of ageing and low birth rates in the citizen population, and has kept it from shrinking in the longer term, said the report.

Most of the new citizens and PRs were below 40 years old.

National University of Singapore sociologist Tan Ern Ser said at the end of the day, what matters is the age profile of the population, rather than size.

If Singapore has the right infrastructure, it could also cushion the impact of a greying population in which one in four people are aged 65 or older by 2030.