SINGAPORE - Hidden more than 1,000m underwater along the Sunda Strait off the coast of Jakarta is a peculiar spider crab with plates resembling ears that actually protect its eyes.

It had not been seen for some 10 million years, till researchers from Singapore and Indonesia discovered it while trawling the depths of the sea in March.

Researchers believe the 6cm-wide crab, dubbed "Big Ears", is from the Rochinia genus.

More than a dozen new species of crustaceans were discovered on the pioneering expedition into the deep waters off the southern coast of West Java.

In total, some 800 species from more than 200 families of sponges, jellyfish, molluscs, starfish, urchins, worms, crabs, prawns and fish were discovered, accounting for more than 12,000 individual animals.

Professor Peter Ng, head of the Lee Kong Chian Natural History Museum at the National University of Singapore, and Professor Dwi Listyo Rahayu, senior research scientist at the Research Centre for Oceanography of the Indonesian Institute of Sciences, led the 31-member team on the 14-day trawling expedition.

They sailed from Jakarta to the Sunda Strait, and waters off the Indonesian port of Cilacap, in the south-western part of Java.

Using trawls, dredges and other devices capable of capturing creatures even a few millimetres long, the team collected samples from 63 stations, at depths of between 500m and 2,000m under the sea.

Prof Rahayu said trash was a problem. Only five or six stations were able to trawl the sea without picking up rubbish.

But there was treasure in the trash. One of the decorator crabs was found hidden in discarded underwear.

"How rubbish affects the creatures, we still do not know. But ocean plastic is a huge problem," said Prof Ng.

The expedition was not without problems. One of the nets snared something heavy underwater which could have caused the cable to snap.

If that had happened, there was a real chance the flaying cable would have cut someone on board the ship.

But the captain stopped the ship instead of using force to disentangle the net, which Prof Ng said is something to learn for future expeditions.

He said: "On the research front, our teams learnt a lot about how to conduct deep-sea science, handle the various equipment needed for such work, and had the opportunity to sample and examine a multitude of fantastic deep-sea animals." 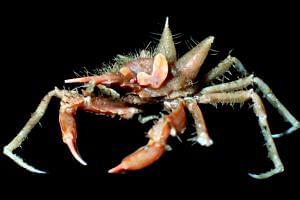 The samples will be studied, and the findings will be shared and discussed at a workshop slated to be held in Indonesia in 2020, and later published in The Raffles Bulletin Of Zoology.

Prof Rahayu said the Indonesian scientists were exposed to new scientific techniques and methodologies through interactions with scientists from other nations.

"Hopefully, such knowledge transfer and collaboration would build stronger and more resilient ties between our two nations," she said.