Season parking rates at carparks outside of restricted zones and designated areas (RZ/DA) in or around the city and central regions will now be differentiated between residents and non-residents.

Previously, motorists paid the same rate in non-RZ/DA Housing Board carparks regardless of whether they lived in the estate or not.

From Dec 1, residents who buy season parking for HDB carparks within their own estate will pay $80 per month for surface and $110 for sheltered carparks for their first car. This is up from the current rates of $65 and $90 respectively.

Non-residents will pay rates of $90 for surface and $120 for sheltered carparks. Residents with more than one car will pay the same rates as non-residents for their second or subsequent cars.

"I welcome the differentiation for second cars and non-residents. It's good that they prioritise residents who need the space," said Toa Payoh resident Joan Tai, in her 40s, whose household owns one car. 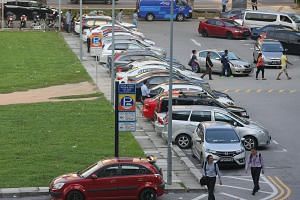 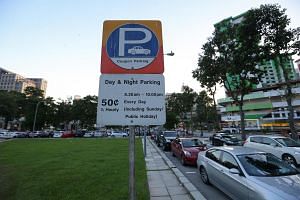 However, she was unsure whether the differentiation would effectively discourage non-residents from buying season parking if, for instance, they work nearby.

"A $10 difference is not that significant. Perhaps it could even be a little higher," said Ms Tai.

Residents will be identified based on their registered address. This means households in which two different members each own a car will be considered as owning two cars, and will be required to pay the higher rate for the second car. There are some 31,500 HDB households with more than one car, out of about 981,100 resident HDB households.

Ms Dolly Chua, who lives in Serangoon Gardens, said parking fees are one of many expenses of owning a car, and the revised charges would give potential car owners a pause to re-evaluate the costs of owning a car. "There were several times I've been unable to even get a season parking coupon because of oversubscription," said Ms Chua, who is in her late 50s and self-employed in the beauty and skincare industry.

"It's not fair to people who move into a new neighbourhood and are unable to park their cars because of non-residents, or older residents who have taken up more than one parking space per household."

Urban Redevelopment Authority carparks, which already differentiate between residents and non-residents, will also adjust their season parking charges similarly. The residential rate for URA surface carparks will be raised from $65 to $80, the same as HDB surface carparks.

The lower bounds of these rates are up from $80, $140, and $170, respectively, while the upper bounds have not been adjusted.

Similar to HDB carparks, residents will pay the same commercial rates as non-residents for their second and subsequent cars.

How the changes stack up