Hands-on activities planned for guests at 338-room eco-resort, which opens in 2023

Beyond snoozing in the middle of five wildlife parks, overnight guests at the future eco-resort in Mandai will be able to participate in behind-the-scenes activities where they can work with keepers and learn about the animals.

Mr Mike Barclay, group chief executive of Mandai Park Holdings, said during a media conference yesterday that the resort will offer a unique opportunity for guests to experience hands-on and learning activities that are not currently available.

Guests could, for example, be taken to the zoo's elephant enclosure in the evening to help keepers put together "food puzzles" to be placed in the exhibit, and return in the morning to watch the elephants pull apart the branches and twine enveloping the treats, he said.

Plans for the resort, first announced in 2017, include hotel rooms, elevated cabins and 24 treehouses designed in the shape of seed pods and set among the trees surrounding the resort. 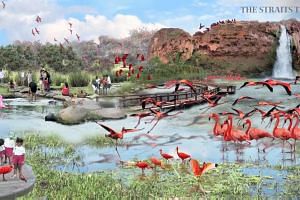 The cost of the resort, which will be owned by Mandai Park Holdings and run by Banyan Tree, is subject to tender and has yet to be determined, said Mr Barclay.

It will also limit energy use with measures such as natural ventilation and the use of solar panels.

As many native animals are nocturnal, an acoustic consultant has been hired to ensure that sound from within the resort does not spill out, he added.

Mandai Park Holdings is spearheading plans to turn Mandai into an eco-tourism hub by 2023.

The Jurong Bird Park is due to relocate there next year, while a new Rainforest Park will open in 2021.

Both parks, as well as the resort and two new nature-themed indoor attractions, will sit adjacent to the existing Singapore Zoo, River Safari and Night Safari.

Banyan Tree executive chairman Ho Kwon Ping said the resort will be unlike the others it operates across the globe.

To minimise unwanted interactions between hotel guests and surrounding wildlife, a 2m-tall barrier will ring the resort, while low-level lighting will be used on paths to guide guests and discourage them from wandering into the rainforest.

A three-storey carpark at the entrance of the parks will have two levels added so that parking will not have to be offered on the east side of the precinct, said Mr Barclay.

Among other measures, an eco-bridge for animals will be completed by the end of this year to provide connectivity between the north and south sides of the nature reserve, said Mr Barclay.

Where the Mandai resort will be

A version of this article appeared in the print edition of The Straits Times on May 24, 2019, with the headline 'Play zookeeper at Mandai resort'. Subscribe
Topics:
More
Whatsapp Linkedin FB Messenger Telegram Reddit WeChat Pinterest Print Purchase Article Copy permalink