That is because developers are subject to demand and supply forces in the market.

In particular, they are subject to the Additional Buyer's Stamp Duty (ABSD), where they must build and sell new units within five years of the site being awarded, or incur additional duties of 15 per cent of the site's purchase price.

At the same time, en bloc sites taken off the market now will eventually be put up for sale in the next one to two years, which Mr Wong said would increase supply in the market and put some "moderating pressure on prices down the road".

About 2,700 private residential units have been sold en-bloc in 2017 so far, more than four times that of the 600 units sold last year.

First, that developers are keen to replenish their land banks.

Mr Wong noted a "healthy increase" in the sales of new units in the first three-quarters of the year, which in turn means "unsold supply in the pipeline has come down".

A second reason is that successful en bloc sales in 2016 may have encouraged more owners of ageing residential projects to initiate the process this year to monetise their assets, he said.

On whether the Government has to ramp up its land sales to meet developers' demand for land, Mr Wong said it will consider several factors before deciding on the quantum of land to put out, including the supply of these new units, population and income growth, and property market conditions.

Observers have said about 9,300 new units could be generated from the redeveloped en-bloc sites sold since last year.

Coupled with an estimated 7,400 units coming from awarded Government Land Sales sites, the bulk of this new supply of 16,700 units could be available for sale in the next one to two years, and be completed by 2021 onwards. 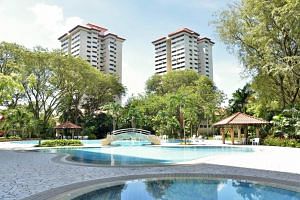 The GLS programme is updated on a half-yearly basis with sites on a Confirmed List - where sites will be released for sale within the next six months - and a Reserve List - where a developer can initiate sales for sites if they assess there is enough demand.

Details of the GLS programme for the first half of 2018 will be announced by the end of this year.

Said Mr Wong: "The Government will continue to monitor the overall trends and developments closely, and take appropriate actions to maintain a stable and sustainable property market."