SINGAPORE - Demolishing the 38, Oxley Road house, but keeping its historic basement dining room with a heritage centre, is an intermediate option that could "provide a good solution" to the ongoing debate on what to do with the home of founding Prime Minister Lee Kuan Yew.

Deputy Prime Minister Teo Chee Hean said this in Parliament on Monday(July 3), pointing out that the ministerial committee considering options for the house, which he set up and chairs, has been studying various intermediate options.

He was delivering a ministerial statement concerning the committee.

"I personally think there are merits in these intermediate options which could provide a good solution," he said, adding that studies are ongoing.

He added that the committee does not take a binary approach when considering options - meaning the house must either be kept as is, or demolished.

"Instead the committee's approach is to study and prepare a range of options for the property and the neighbourhood so that a future Government can make an informed and considered decision when it becomes necessary," he said.

In saying this, he also outlined the next steps for the committee, pointing out that the Government was not required to make a decision on the house now as Dr Lee Wei Ling is still living there. And no decision is required until she moves out. 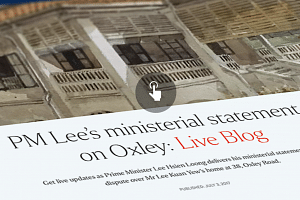 At the moment, the house is owned by Mr Lee Hsien Yang.

He also noted it was Mr Lee Kuan Yew's wish in his will for Dr Lee to stay at the house as long as she wished.

"Even if the Government were to take a position today, it would not bind a future Government at the time when that future government has to make a decision an implement it," he said.

But despite the fact that there was no urgency for the committee to complete its studies "within a time frame", DPM Teo said he would "consult my colleagues to see if it is useful to put out a range of possibilities, to let the public ponder on the matter without having to arrive at any decision".

DPM Teo also revealed that he had met Mr Lee Hsien Yang five times between April 14 and July in 2015, and another time in April 2016, for a range of issues before the ministerial committee was formed in April 2016.

In their April 27, 2015, meeting, DPM Teo said various possibilities for the property were discussed.

"I informed Mr Lee Hsien Yang that I would personally not support the options at either end of the range. At one end, preserving the house as it is for visitors to enter and see the private spaces, would be totally against the wishes of Mr and Mrs Lee Kuan Yew," he said.

"And at the other end, demolishing the house and putting the property on the market to develop new private residences such as luxury apartments.

"This remains my view."

He said it was his hope that a "wise decision" would be made on the matter "in an informed and considered way that takes into account the significant public interest to preserve the heritage of our young nation, while respecting Mr Lee's personal wishes for the house".