In a commentary last week, Editor-At-Large Han Fook Kwang wrote about the process by which Singapore's next prime minister will be chosen, and suggested that it could be relooked. The People's Action Party (PAP) chairman responds to the piece in this letter.

He, of all people, should know that the process by which we choose prime ministers is anything but "opaque". He has worked on many books with Mr Lee Kuan Yew, and heard Mr Lee describe in detail leadership succession in the People's Action Party (PAP).

We scour the country to find able, honest and committed people to field in elections. Possible candidates go through a rigorous vetting process. This begins the day after every general election.

The most promising among every cohort of MPs are then brought into government. They work with senior ministers, and are tested and stretched in a range of portfolios. In the process, they become confident in their roles and gain the trust of the people.

The shared sense of purpose among ministers, and the consciousness that becoming PM is a responsibility to be borne and not an ambition to be sought, means the ruling party is not riven by factions

As with both ESM Goh Chok Tong and PM Lee Hsien Loong, the next prime minister will be chosen by the next generation of leaders from among themselves. If all goes well, they will make this choice by consensus. Older ministers, including the current PM, will stay out of the deliberations. This is as it should be, for it is the younger ministers who will have to work with the new PM and help him succeed.

The new leader will also have to be elected into the PAP's Central Executive Committee, and become the party's secretary-general. And constitutionally, the Prime Minister must enjoy the confidence of the majority of Members of Parliament. This means he must have support of the party cadres as well as the parliamentary party. And he will not have either if he fails to unite Singaporeans and win elections. 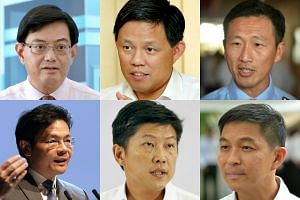 Who will lead Singapore next?

Australia has had five prime ministers in five years, with three of the four switches due to intra-party feuds. In the United States, the major parties choose their presidential nominees through a prolonged, prodigiously expensive and deeply divisive process. And in Britain, the Conservative Party has just had a brutal contest for a new leader, while the Labour Party is in the throes of yet another internecine struggle to determine the fate of its current leader.

We are lucky to have had leadership cohesion over five decades, across three generations. The shared sense of purpose among ministers, and the consciousness that becoming PM is a responsibility to be borne and not an ambition to be sought, means the ruling party is not riven by factions.

Why would we want to exchange this calm and rational process for periodic political bloodlettings that leave deep and lasting wounds, both within the party and the body politic?

• Mr Khaw is chairman of the People's Action Party. He is Coordinating Minister for Infrastructure and Minister for Transport.

A version of this article appeared in the print edition of The Sunday Times on September 04, 2016, with the headline 'Next PM will be picked by the young ministers'. Subscribe
Topics:
More
Whatsapp Linkedin FB Messenger Telegram Reddit WeChat Pinterest Print Purchase Article Copy permalink