SINGAPORE - Collecting documents such as passports and identification cards should become less hassle, under plans being drawn up by the Immigration and Checkpoints Authority (ICA) to create a 24-hour Integrated Services Centre.

By 2023, Singaporean customers will be able to use self-service kiosks which use biometric technology, allowing them to pick up their documents within an estimated 15 minutes instead of having to make appointments to meet an ICA officer.

Speaking at the ICA's annual workplan seminar on Friday (May 10), Home Affairs and Law Minister K. Shanmugam said the centre will be located in a new 10-storey building adjacent to the existing ICA Building, adding: "It will provide a convenient, one-stop service for members of the public."

During the event at the National University of Singapore's University Cultural Centre, Mr Shanmugam also shared details about a "completely revolutionary" immigration process called the New Clearance Concept (NCC) which is due to be launched in 2022.

It will use biometrics and data analytics to speed up immigration processes at airports and checkpoints.

The minister commended the ICA's adoption of technology to address future challenges, such as increased traveller and cargo volume and a shrinking labour force, calling it "phenomenal" and "world-leading".

Currently, customers who visit the ICA Services Centre have to go to different departments to collect various documents. At the new facility, they will be able to collect all the documents from one place. 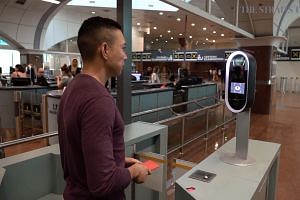 Video analytics and biometrics screening technology to be expanded to more checkpoints: ICA

All applications for passport, NRIC to go online from 2020

A new system, iSMART, will store and deliver the documents securely using robotics. The automated processes will shorten the duration for collecting each document to no more than 15 minutes.

Customers will be able to use the ICA website to access real-time information on the crowd situation to plan their trip to the Integrated Services Centre.

The new building will be located on the current site of the carpark adjacent to the ICA Building at Kallang Road, which will continue to house the ICA headquarters.

The carpark will be closed for construction works from January next year, and visitors will be encouraged to take public transport, or to park their vehicles at other nearby carparks.

As part of the NCC, the ICA will launch the Electronic Arrival Card (EAC) in the second half of this year. Foreign visitors can get their EAC online before arriving, and will not have to fill in the paper-based cards, which the ICA will phase out by 2021.

From September this year, airlines will also submit passenger information, such as passport and flight details, to the ICA to help in risk assessment and screening of travellers.

"Similar programmes have been implemented in many countries to combat terrorism and transnational crime," said the ICA.

The ICA has also been testing an Automated Border Control System (ABCS) at Tuas Checkpoint since last month, allowing Singaporeans to use facial and iris biometrics to verify their identities, eliminating the need for passports to be scanned. It will later be extended to foreigners.

Mr Shanmugam also launched a new crest for the ICA, along with a new mission and vision.

Assistant Commissioner Chia Hui Keng, director of ICA’s Corporate Communications Division, said the agency will “review the outcomes and impact of our initiatives to ensure they lead to meaningful changes”.