More than half of Singapore's residents are concerned about their job security, employment pros-pects and children's future, according to a study by the Institute of Policy Studies (IPS) think-tank.

It also found that more than seven in 10 here identify themselves as belonging to the working and lower-middle classes.

It is the last of a three-part series under the World Values Survey, a global research project monitoring changing public beliefs and their impact over time across 80 societies.

Researchers from IPS' social lab conducted face-to-face interviews with a nationally representative sample of 2,012 Singaporeans and permanent residents aged 21 and above from November 2019 to March last year.

Three in 10 respondents said they were "very much" worried about losing or not finding a job, while 23.6 per cent said they were worried "a great deal".

The unemployed and those who were studying were unsurprisingly the most concerned by far - nearly seven in 10, compared with approximately half of all other groups. The study said this indicated some level of concern about the employment market.

Younger respondents also generally expressed more fears. The study said this was to be expected of the most economically active age group. 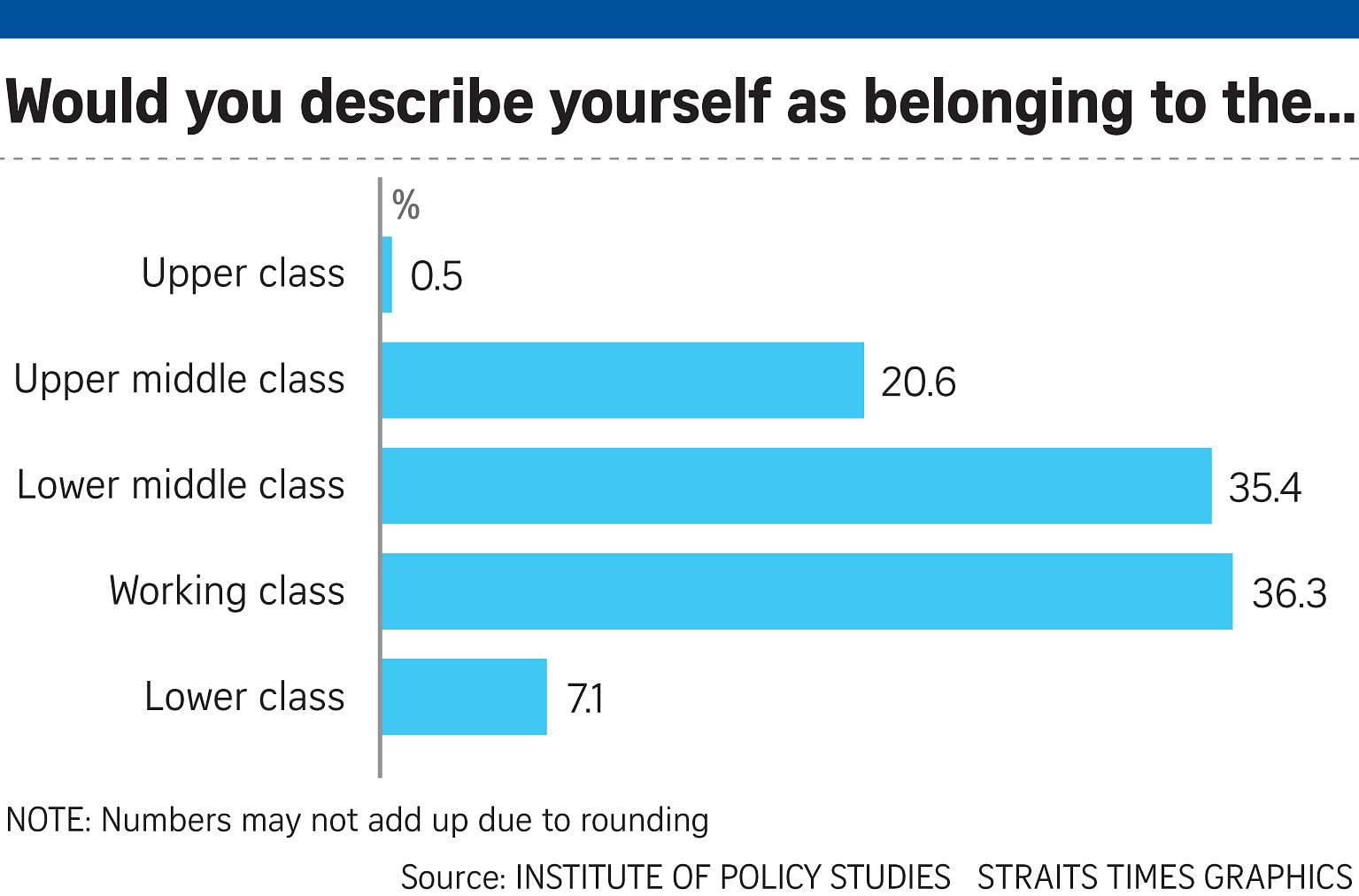 The older group is likely to have heightened worries because they face competition from younger employees, said the study. They are also more likely to have children still in their school-going years; and thus have greater concerns over the sufficiency of their household income.

If you are living, for example, in a condo and you see someone in a landed house, you might still feel like you have fallen short. Or you could just want your family to be happy together, to make ends meet, and for everybody to have food on the table. That could be a source of happiness and satisfaction as well.

Almost six in 10 respondents said they were very much or a good deal worried about not being able to give their children a good education.

IPS also asked respondents to rate themselves on where they belonged in terms of social class and income levels.

Most picked "working class" (36.3 per cent) and "lower-middle class" (35.4 per cent), and more than 75 per cent of the respondents also perceived themselves as earning mid-range income.

These results, the study said, reveal that most place themselves in the middle of societal strata when it comes to income and class.

The study also noted that a large majority of respondents of lower socioeconomic status reported being better off than their parents, which indicates some level of growth in this regard across the population.

Elsewhere in the report, it was observed that respondents who were less affluent were also most likely to report being "very happy" compared with others.

"If you are living, for example, in a condo and you see someone in a landed house, you might still feel like you have fallen short," she said. "Or you could just want your family to be happy together, to make ends meet, and for everybody to have food on the table. That could be a source of happiness and satisfaction as well."

Would you describe yourself as belonging to the...

A version of this article appeared in the print edition of The Straits Times on July 03, 2021, with the headline 'More than half of Singapore residents worried about jobs'. Subscribe
Topics:
More
Whatsapp Linkedin FB Messenger Telegram Reddit WeChat Pinterest Print Purchase Article Copy permalink