A 77-year-old man died in hospital in the wee hours yesterday after his mobility scooter toppled as he was backing out of a lift on the ground floor on Sunday.

The doors of the lift at Block 247, Pasir Ris Street 21, where Mr Lim Hang Chiang lived, had opened when it was around 15cm above the floor of the lobby, said his younger son Lim Keng Swee, 45, a safety executive. But his father did not realise that.

Technical executive Mohamad Ahsurin, 35, one of two residents who were in the lift with the elder Mr Lim, said: "I was holding the lift door for him. The (mobility scooter) fell out of the lift backwards, and he hit the back of his head."

He and the other resident immediately helped the elderly man off the mobility device, removed it and let him lie on his back.

The younger Mr Lim's wife, Madam Wang Ying, 37, said the accident happened at around 10.20am on the day that her father-in-law was to have a joint birthday celebration with his 21-year-old granddaughter. He would have turned 78 on Friday.

Madam Wang, a casino dealer, was at home when her father-in-law left to meet his older son for breakfast. But soon after, a neighbour told her that the elderly man had met with an accident. "I went downstairs quickly and saw that my father-in-law had fallen, and two others who were in the lift with him helped him back onto his (mobility scooter)," said Madam Wang. 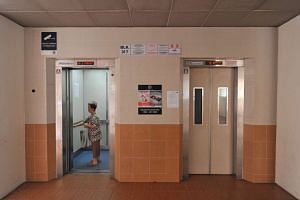 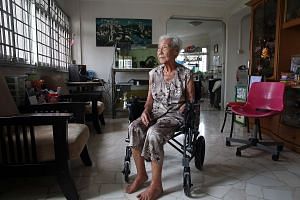 I did not feel pain, I was just so scared: Tah Ching Road lift accident victim 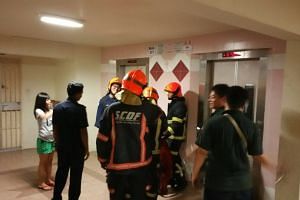 Maid rescued from lift that 'shot up 17 floors'

He was not bleeding, but the back of his head was hurting, she added.

The family took the elderly man to Changi General Hospital, where he threw up thrice, said Madam Wang. He later fell into a coma.

CT scans and an X-ray showed he had a brain haemorrhage. Internal bleeding affected half of his brain, said Mr Lim Keng Swee.

Madam Wang said: "He was on life support, but the doctor said he was not suited to undergo surgery because of his age. So the doctor recommended that we gather all our friends and family to visit him. If his condition worsened, they would consider removing life support."

Some 30 relatives and friends went to the hospital that evening.The elderly man died at around 2.15am. "The accident happened so suddenly. No one expected things would turn out this way," said Madam Wang.

It was not the first time the lift had caused problems, she said. She and other residents had noticed that in the past one to two years, the lift would sometimes not be level with the floor outside.

Residents had complained about the condition of the lift, which is around 24 years old. But nothing much was done, she said.

The late Mr Lim's wife, Madam Kwek Sar Moi, 78, had tripped and fallen earlier this year as the lift was not level with the floor outside.

The Pasir Ris-Punggol Town Council said it was notified of the incident at around 10.40am on Sunday. "A lift rescue team was immediately sent on-site to suspend lift operations until the cause of the incident could be established."

It added that it met the Building and Construction Authority (BCA) and lift contractor on-site yesterday morning as well. A BCA spokesman said it had suspended the lift for further investigation and instructed the town council to appoint an authorised examiner to conduct a thorough inspection. The authority also told the town council to check the other lift in the block.

The late Mr Lim was very independent and would get up at 4am to cook his own breakfast every day, said Madam Kwek, adding that he was a simple man who was very fond of his six grandchildren."I was shocked and devastated to find out about the incident. This should not have happened."

This is the latest in a spate of lift-related accidents. Last October, an 85-year-old Jurong resident's hand was severed by lift doors, and in March this year, a 36-year-old maid fell and hurt her back in Ang Mo Kio after the lift she was in suddenly shot up 17 storeys.