SINGAPORE (THE NEW PAPER) - She heard a bamboo pole hitting the ground and thought nothing of it.

But when Madam Maimon Ayab, 86, peered out of the window of her first-storey flat, she was shocked to see an elderly man face-down in the carpark.

Madam Maimon, who got her 48-year-old grandson to call the police, told The New Paper on Wednesday (Aug 21): "It was scary. There was a bit of blood coming from his head.

A police spokesman said on Wednesday that they were alerted to a case of unnatural death at Block 26, Toa Payoh East, on Tuesday at 10.17am. 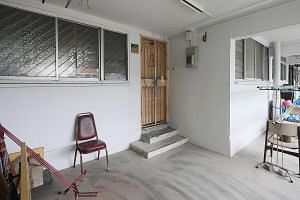 She said an 84-year-old man was found motionless at the foot of the block and was pronounced dead by paramedics at the scene.

While police investigations continue, Chinese-language newspaper Lianhe Wanbao reported on Wednesday that the man's wife had suffered a heart attack after witnessing him fall and she later died in hospital.

A Singapore Civil Defence Force (SCDF) spokesman told TNP that it had also responded to an incident at the same block at about 11.25am and a person was taken to Tan Tock Seng Hospital.

Residents of the block said the couple lived in a 10th-storey unit.

Madam Mira Jamira, 66, who lives next door, said: "Several SCDF personnel went to their unit and brought the wife out on a stretcher. I don't know if she fainted or had a heart attack, but I think she was unconscious."

She said the couple had two daughters and a son, and the youngest, a daughter, whom Madam Mira believed to be about 30 years old, lived with them in their three-room flat.

When TNP visited the flat on Wednesday, no one answered the door.

Madam Mira said the couple were friendly and loving, and the husband was still active, cycling every morning for exercise.

"I've never heard them quarrel, or anything at all," said Madam Mira, who has been living there for 29 years.

"They were very good neighbours. I'm sad about what happened to them."