Like all good teachers, Mr Bahari Salleh and Madam Rapeah Talil, both 72, loved their students and profession - but that love is rivalled by the one they have for each other.

The retired couple, who celebrate their golden jubilee on Dec 5, were introduced to each other through a mutual friend while studying at the teacher training college in 1963.

Neither can remember who made the first move but they are certain of one thing - the initial attraction was mutual and they started dating shortly after.

As one chapter closed in their lives, another began - Mr Bahari proposed to Madam Rapeah days after their final exams .

We would help each other with lesson planning at night and that was our way of spending time together on the weekdays.

MR BAHARI SALLEH, on the early years of their marriage

The day of their wedding also coincides with Mr Bahari's birthday.

"We were too busy preparing and didn't realise it was his birthday until the morning itself," said Madam Rapeah.

The early years of their marriage were especially tough on the couple as their jobs did not end when they came home. 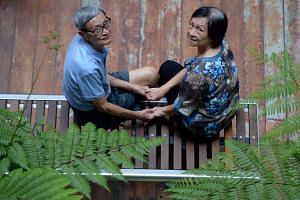 When an English-speaking teacher met a kampung beauty 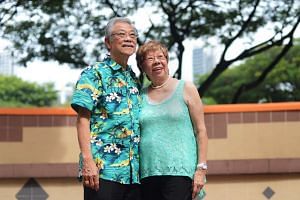 A perfect match, right down to the clothes they wear

"We would help each other with lesson planning at night and that was our way of spending time together on the weekdays," explained Mr Bahari. Mr Bahari taught Design and Technology in Bartley Secondary School, while Madam Rapeah taught English, mathematics and science in Bedok South primary school.

The couple, who have four children in their 40s, live in a five-room flat in Chai Chee.

Mr Bahari volunteers with the People's Association and sits on the management committee at Kampong Kembangan Community Club. "My wife is not a member but I take her along to all the events when I can," he said.

The couple are keeping their celebrations for their marriage jubilee small. They will be going for a three-day cruise to Malacca, where they are looking forward to "eating and sleeping" and relaxing by the ship's swimming pool.