Dressed in an unassuming polo T-shirt and jeans, it is hard to tell that Mr Desmond Tan was once the head of Asia sales at one of the largest European banks.

Forced to quit shortly after the 2008 financial crisis, he was later turned away from jobs by bank after bank, some even saying he was "over-qualified" for the positions they were offering, given his over two decades of experience.

"I used to deal with money that numbered in the millions," Mr Tan said. But now his fees come only in the hundreds.

Mr Tan is not alone in joining the group of highly qualified professionals who have spent years climbing their way up to the top, only to be retrenched.

And when they try to search for a new or similar job, they realise that the fall from the top was a hard one.

Many such job seekers say that the search for a new job takes longer, and sometimes results in them taking up a role outside of their area of expertise and far below their previous pay.

Fifty-seven per cent of Singaporeans and permanent residents who lose their jobs are able to find a job within six months, according to the Manpower Ministry. For professionals, managers, executives and technicians (PMETs), however, the proportion was below average at 49 per cent for the same time period.

Workers aged 40 and above also fared worse than younger groups, with a re-entry rate of 53 per cent.

Here, however, it is unclear if those who managed to find jobs actually reached a level similar to that which they used to hold.

The Central Provident Fund Board, which provides data for re-employment rates, said it does not track the difference in wages for the new jobs.

But it seems hard for out-of-work PMETs who held senior management positions to find new jobs that are commensurate with their skill levels and pay expectations. 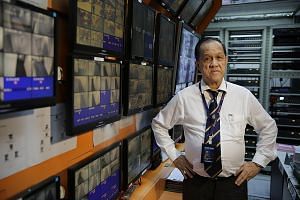 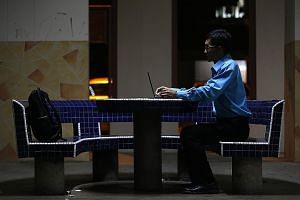 'I had to tell myself to never give up'

"A rough 40 per cent are fortunate enough to get back into a job that is similar in grade and salary, 60 per cent have to reinvent themselves or do something totally different," noted Mr Paul Heng, managing director of NeXT Career Consulting Group.

Human resource experts and economists said factors such as economic restructuring and rising competition could explain why it is so difficult for older PMETs to regain their positions at the top of the company food chain.

"Some jobs aren't available in Singapore any longer because regional positions may have moved out or are replaced by enlarged roles of other people," said Singapore Human Resources Institute president Erman Tan.

This hits long-serving PMETs hard because many of these workers have had to pick up employer-specific administrative and managerial skills. These are not easily transferrable to other companies or industries, said Nanyang Technological University assistant professor Walter Theseira.

Experts also note that there is generally a rigid pyramid-like structure in many industries. With a rising number of better-qualified people in the workforce, there is more competition for limited senior positions at the top of the pyramid of jobs.

And once someone at the top leaves a post, whether voluntarily or not, it will be hard for that person to find another similar position.

Some older PMETs continue to try to search and wait for the right opportunity. Sometimes, these openings turn up and the worker can resume his former career path.

Often, the only route available for such workers is to switch careers by picking up new skills in an industry with prospects.

Observers said older PMETs can help themselves by continuing to network and update their skills.

"(They must) build value for themselves so that they add value wherever they go and can then command the salaries they want," said labour MP Patrick Tay, who heads the National Trades Union Congress' PME Unit.

Those in urgent need of a job may have to lower their expectations.

Nee Soon GRC MP Lee Bee Wah said that she helps match employers with job seekers among her residents, and "normally those who are flexible in the distance from workplace, salary and working hours get jobs easily".

The Government is moving on several fronts to tackle this.

One is SkillsFuture, a national initiative which aims to equip workers with skills that future industries require. This will make it easier for workers to make the switch easily to new growth industries.

But this is a move that will take time to root.

The other, more immediate, solution is a new wage subsidy scheme that will support wages of older professionals, managers and executives by up to 40 per cent, capped at $7,000 a month for a year.

Manpower Minister Lim Swee Say announced this earlier this month and said: "After the one year, hopefully most of them will find that the adaptation is an effective one."

Lee Kuan Yew School of Public Policy economist Hui Weng Tat said the programme could help by reducing the risk on the part of the employer and increasing the incentive for workers to take up the job.

For now at least, such news is cold comfort for workers like Mr Long Khin Keong.

A former general manager in the oil and gas industry, he used to draw a salary of about $15,000 a month. These days, Mr Long, 58, takes eight months to earn that much as a taxi driver.

He got behind the wheel about a year ago after struggling for six years to find a suitable job.

"Hopefully somebody 'up there' reads this and improves the predicament of many like myself.

"I'm not asking to become a GM again, I just want to be somewhere I can contribute with my experience," he said.

A version of this article appeared in the print edition of The Straits Times on July 20, 2015, with the headline 'Highly trained, middle-aged and out of work'. Subscribe
Topics:
More
Whatsapp Linkedin FB Messenger Telegram Reddit WeChat Pinterest Print Purchase Article Copy permalink