SINGAPORE - Fifty Singaporean film-makers have signed a position paper calling on the authorities to reconsider proposed amendments to the Films Act.

A key concern in the paper - released on Friday (Dec 22) - is the expanded powers that Infocomm Media Development Authority (IMDA) officers will have in investigating breaches.

The paper's signatories said they were concerned that the changes "will erode public confidence in the processes that regulate access to films in Singapore".

Responding to queries from The Straits Times, IMDA said: “As part of the public consultation process, we welcome views and will take all feedback and comments into consideration... We will publish our responses in our closing note, which will be issued after the close of the consultation.”

Currently, only a limited number of IMDA officers - a Censor, Deputy or Assistant Censor, or Inspector of Films - are empowered by the Films Act to enter premises without a warrant, and conduct search and seizure over unlawful films, such as obscene or party political films, the paper noted.

With the changes, these powers extend to any classification or licensing officer, who may enter property by breaking open doors and windows if necessary, the film-makers added.

The officers may, furthermore, do so in the course of investigating any suspected breach of the Films Act - not just obscene or party political films, they noted.

"Such sweeping and invasive powers should only be granted to the police, the custodians of law and order of the country," said the paper.

"It is not clear that classification or licensing officers have the necessary law enforcement operational background to wield such powers."

In a previous response to concerns about expansion of powers, IMDA pointed out that its officers "have to act quickly to secure evidence of the contraventions while minimising the chances of the suspected offender fleeing the scene".

IMDA added that its enforcement officers are adequately trained to carry out investigations and enforcement actions in a way that stands up to scrutiny in a court of law.

The film-makers submitted the paper to the IMDA during a meeting on Friday.

They are the latest to take issue with the proposed amendments. A separate petition voicing similar concerns on enforcement powers was started on Monday by independent film-maker Jason Soo and has attracted about 700 signatures from members of the public. 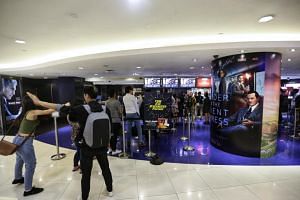 Public consultation on proposed changes to the Films Act began on Dec 5 and is due to end on Dec 30, following two extensions.

But the 50 film-makers are calling on IMDA to extend consultation by another four weeks.

"This will provide adequate time for members of the public to carefully consider the social and political implications of the proposed amendments," they said.

Other proposed amendments to the Films Act include a new scheme allowing some video companies to classify video titles up to PG13 rating according to IMDA guidelines, and a new video games class licence.

In their position paper, the film-makers also outlined other concerns.

One is over potential breaches of personal data in the enforcement of the Act, given that film content is stored in devices that may "contain other personal and private content unrelated to the film in question". These will be made seizable by IMDA officers, with "no way of ensuring that the privacy of personal data will be protected".

"This may potentially result in severe breaches of privacy and civil liberties by persons who may not have law enforcement backgrounds," the paper said.

Another proposed amendment to the law gives the minister "sole discretion" - after consulting an independent panel - over the outcome of appeals for films that have been refused classification for undermining national security.

This change is made "in consideration that national security is at the heart of the Government's core responsibilities" and in view of "the increasing pervasiveness of media", said the IMDA in its public consultation documents.

The film-makers are calling for the current framework to be retained, with film-makers making appeals before a Films Appeal Committee (FAC) made up of citizens.

The paper also called for FAC's minutes of discussions to be published, or the rationale for decisions to be disclosed as far as possible.

One change that the film-makers welcomed: private possession of most unclassified films not meant for distribution or public exhibition will no longer be a breach of the Films Act, under the proposed changes.

The film-makers called for this regulatory loosening to be extended to obscene and party political films as well, so that possession of such films for private use will be made legal too.

Speaking to The Straits Times on Friday, director Boo Junfeng said: "Some of the amendments proposed will matter not just to film-makers but the public at large.

"Beyond being film-makers, we do think that as consumers ourselves, we want to seek accountability and transparency in the decision-making processes."

He added: "This needs to be an ongoing conversation... IMDA has been very accommodating to our request to meet them, and we hope that this engagement will continue, because we all want to find a solution that is equitable for everyone."