TEL AVIV - Singapore is taking action under the Transboundary Haze Pollution Act to go after companies that started fires or let their concessions burn, and contributed to last year's haze, Environment and Water Resources Minister Masagos Zulkifli has said.

It has issued notices to six of these Indonesia-based companies, asking them to explain what steps they are taking to put out and prevent fires on their land.

Two of them have replied. A director of one of the four firms that have yet to respond has also been served with a notice to provide information on what his company is doing to mitigate fires on its land and prevent a repeat.

"He has left, but he is required to return," Mr Masagos told reporters.

"Should he not return, he would have violated our laws and therefore, among others, we can arrest him upon entry later than the notice on which he is supposed to return," he added.

Mr Masagos declined to reveal the name of the director or his company, but said he can also be detained in Singapore if he does not give the information required.

"We must not let companies, corporations get away with their most egregious acts," he said.

Mr Masagos made these points when asked by Singapore reporters about comments by his Indonesian counterpart questioning what Singapore had done to combat forest fires.

Indonesia's Environment and Forestry Minister Siti Nurbaya Bakar had told environmental news site Foresthints.news last week that her country had been attempting to prevent the recurrence of land and forest fires, and consistently enforcing the law.

"My question is - what has the Singaporean Government done? I feel that they should focus on their own role," she was cited saying.

Mr Masagos noted that Singapore has a good relationship with Indonesia on many fronts because both countries are working together. 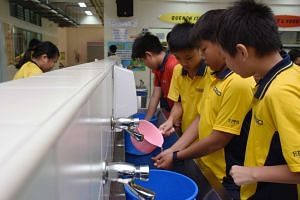 Singaporeans can do more to save water, says Masagos Zulkifli

But he said the haze was a complex issue that had to be tackled not just bilaterally, but also at the Asean and regional level.

For instance, Singapore led an Asean peatland management programme to raise awareness of what people can do to manage and restore peatland, on which most forest fires take place.

The National Environment Agency had served notice to Asia Pulp and Paper last year, asking for information on steps its subsidiaries and Indonesian suppliers are taking to put out fires in their concessions.

"We are now looking at them to see how we are going to move forward," Mr Masagos said.

But he would not be drawn into commenting on what actions could be taken against the companies, saying investigations are still ongoing.