But those attending a green building event on Tuesday (Nov 5) heard that if they were well-planned, cities could actually help to tackle climate change and reduce its impact on people.

Foreign Minister Vivian Balakrishnan, who was guest of honour at the event, said the building industry was crucial in tackling the two global megatrends of climate change and urbanisation.

Carbon dioxide levels in the atmosphere were going up, he said, and people were also voting with their feet and moving to cities, where there are opportunities for better education, jobs and cultural exchange.

In 2016, figures from the United Nations showed that an estimated 54.5 per cent of the world's population lived in urban settlements.

By 2030, urban areas were projected to house 60 per cent of people globally and one in every three people would live in cities with at least half a million inhabitants, said the UN in its report titled The World's Cities in 2016.

In dense, well-planned cities, Dr Balakrishnan said the unit cost for supplying inhabitants with resources and services such as water and utilities would be lower compared with more dispersed communities.

"Urbanisation is, in fact, part of the solution for our sustainable future," said Dr Balakrishnan, who is a former minister for the environment and water resources.

During Tuesday's event, which was co-organised by media outlet Eco-Business and the Singapore Green Building Council, Singapore Management University (SMU) climate scientist Winston Chow said well-designed cities could also incorporate technologies that help to reduce the amount of emissions from it. 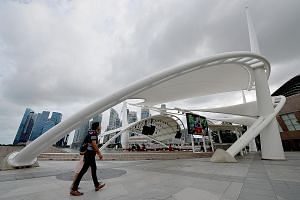 For example, they could deploy solar panels on rooftops of buildings to reduce reliance on fossil fuel-generated electricity and also make cooling systems more energy-efficient.

About 19 per cent of the 52.5 million tonnes of emissions Singapore produced in 2017 came from buildings and household sector.

This made it the second-largest source of emissions in Singapore after the industrial sector, which contributes about 60 per cent to total emissions.

There are efforts now to make buildings in Singapore greener and more energy-efficient, with about 40 per cent of the Republic's building stock being certified as a green building under the Building and Construction Authority's Green Mark scheme.

Making buildings more energy-efficient may not solve the problem of climate change on its own, as emissions from the burning of fossil fuels is still the main driver of global warming, said SMU's Associate Professor Chow, who is a lead author for an upcoming report by the Intergovernmental Panel on Climate Change.

But every action counts, he said. Moreover, it was also imperative for cities to adapt to changing weather patterns driven by global warming.

This is because cities, with their greater concentration of people, could face greater climate risks from rising temperatures, sea level rise, or droughts as well as floods due to changing rainfall patterns.

"For instance, people could face greater risk of heat stress from the combined impact of heat waves and the urban heat island effect," he said, referring to how built-up areas have higher temperatures.

But cities also have higher potential to adapt, as Singapore has. Incorporating vegetation into the city through green roofs and walls, for example, can cool ambient temperatures, he said.

Dr Ho Nyok Yong, president of the Singapore Green Building Council - which is celebrating its 10th anniversary this year - noted that the industry has shifted toward greater sustainability over the past decade.

The council now has a membership base of almost 500 organisations, up from the initial 129. It has also certified close to 4,000 green building products and materials, such as concrete and ceiling fans, to make it easier for building owners and developers and members of the public to opt for more environmentally-friendly choices.

Dr Ho said Singapore has to approach sustainability as a necessity.

He said: "It has to become part and parcel of how we go about developing and shaping our built environment. In essence, going green must become the new business as usual."