KAZAN, RUSSIA - Ms Regina Chia was 15 minutes away from her turn to showcase her skill on the second day of the WorldSkills Competition when she started to feel dizzy and nauseous.

She had to request to push her competition schedule back by two hours to see a doctor, and struggled to get back on track after that.

So when the 20-year-old was awarded a gold medal in her skill area of health and social care at the competition's closing ceremony on Tuesday (Aug 27), it was an unexpected surprise.

It was one of two gold medals won by Singapore at the global competition of vocational skills, dubbed the "Olympics of Skills", which was held in Kazan, Russia this year.

In total, Singapore's 32-strong contingent bagged 22 awards, the highest number since the Republic started taking part in 1995. Singapore finished ninth out of 63 countries.

The previous record for Singapore was 17 medals, secured at WorldSkills Sao Paulo 2015. 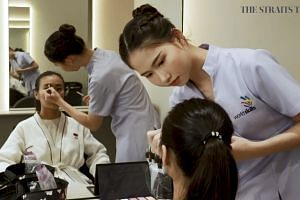 The other gold medal was won by Ms Tan Ying Ying, from Nanyang Polytechnic, who competed in 3D digital game art.

Singapore also clinched a silver in freight forwarding, and two bronze medals in cyber security and water technology. Another 17 young people were awarded medallions of excellence in areas such as cooking and electronics.

Over 1,300 competitors competed in 56 skill areas this year.

China emerged top overall with 35 medals, 16 of which were gold, while Russia took second place with 14 golds among its 22 medals.

In the previous edition of the biennial competition in Abu Dhabi in 2017, Singapore placed 12th out of 59 after picking up two gold medals, three bronze medals and eight medallions of excellence.

Ms Chia, who studied nursing and graduated from Nanyang Polytechnic earlier this year, said: "While I was sick, I had to keep my smile on because that's important in health and social care - if we show that we are sad, the patient can feel it."

In her skill area, competitors are given scenarios to respond to, such as having to treat a patient with stroke who can communicate only through hand gestures.

"I was thinking about my friends and family who were supporting me back home, and also about all the effort I've put in for this competition.

"I didn't want to give up after coming all this way," added Ms Chia, who trained for the competition for almost three years.

She beat competitors from Brazil and Sweden, who took silver and bronze respectively.

Education Minister Ong Ye Kung, who was in Kazan to visit the competition, said he was very proud of the competitors' resilience.

Speaking to The Straits Times on Tuesday, Mr Ong said: "Whatever the results are, whether they win a medal, a medallion or nothing at all, everyone has done so well.

"We have come together as a proud Singapore team and I'm very glad I came to show my support."

Mr Ong had also attended the previous edition in Abu Dhabi, which made him the first education minister to visit the international competition.