SINGAPORE - A building and a road at Nanyang Technological University (NTU) have been given new names to mark pioneers' contributions to the development of the country's education system.

The building that houses the College of Humanities, Arts and Social Sciences (CoHASS) has been named the Singapore Hokkien Huay Kuan (SHHK) Building, while Nanyang Valley, a road adjacent to the Chinese Heritage Centre - the old Nantah Administration Building - will be renamed the Tan Lark Sye Walk.

A plaque to mark the renaming was unveiled in a ceremony at the CoHASS building on Saturday (Oct 19) that was attended by about 300 guests, including Education Minister Ong Ye Kung.

"Their legacy should not be forgotten by future generations of Singaporeans, even as we revel in the progress that Singapore has made in her education journey, with two top-ranked universities that are among the world's best, and a strong research, innovation and education ecosystem that is the envy of the world, and that other countries aspire to emulate."

The SHHK was established in 1840 and is one of the largest clan associations here.

In 1953, then chairman Tan Lark Sye, a prominent Chinese businessman and philanthropist, mooted the idea of establishing Nanyang University to advance the nation's education and development.

The SHHK donated 523 acres (211.66 hectares) of land at Jurong Road for its campus, while Mr Tan personally offered $5 million, eliciting more contributions from communities in Singapore and Malaya.

Mr Tan also became the first chairman of the executive committee of Nanyang University, which was founded in 1955 and officially opened in 1958.

The Nanyang Technological Institute was subsequently inaugurated on the same grounds in 1981 and merged with the National Institute of Education in 1991 to form NTU. 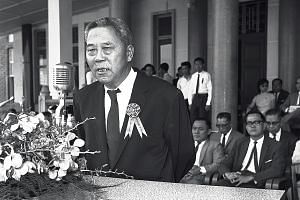 "I hope all of us, especially the younger generation, can remember, learn, and inherit the true spirit of philanthropy, unity and solidarity of our distinguished predecessors," said Mr Chua Thian Poh, SHHK immediate past president.

"And in this new era, let's continue to leverage new opportunities together so that Singapore can continue to thrive and shine."

The SHHK will continue to operate at its headquarters and Cultural Academy in Sennett Road.

The SHHK building and Tan Lark Sye Walk are next to the Chinese Heritage Centre, a gazetted national monument that was the former Nanyang University Administration Building.

The nearby Yunnan Garden, which was the venue for the official opening of Nantah in 1958, will be refurbished into an educational and recreation hub for students and the public.

It will integrate the garden with the Chinese Heritage Centre and an expanded Nanyang Lake to form a heritage precinct on the NTU campus. It will open by the first quarter of next year.

NTU Students' Union president Bryan Michael Chiew said: "The rejuvenation of this precinct will bring new relevance and vibrancy for today's students, and enable them to gain a deeper appreciation of our heritage."

Other NTU buildings that have taken on names in recognition of pioneers include its medical school, the Lee Kong Chian School of Medicine, named after renowned business leader and Lee Foundation founder, Tan Sri Dato Lee Kong Chian, and NTU's Institute of Defence and Strategic Studies, which was renamed the S. Rajaratnam School of International Studies in recognition of Mr S. Rajaratnam's contributions to Singapore as its first foreign minister.