Contractor Tan Kian Choon, 53, was strolling with his wife at East Coast Park on May 8 when they were approached by a frantic woman who had just dragged two boys out of the sea.

Ms Silvia Hajas, 47, asked for help to rescue some boys struggling in the water. She had heard their cries and dove in to rescue two of them, but was too tired to continue on her own to save the remaining two.

Mr Tan agreed to help her. He had seen the boys in the water while walking past, but did not sense that anything was amiss. It was only when Ms Hajas approached him that he realised something was wrong.

"We thought the boys were just playing in the water. Everything just changed in a matter of seconds," Mr Tan said.

He helped Ms Hajas rescue a third boy. During the rescue efforts, his wife, who had a near- drowning experience as a child, feared for her husband's safety.

But Madam Yvonne Gan, a 48-year-old housewife, said: "I was more worried about the boys instead of my husband. I knew he could swim."

She and her husband have three children aged between 17 and 22.

Mr Tan said all concern for his own safety left his mind once he was in the water. 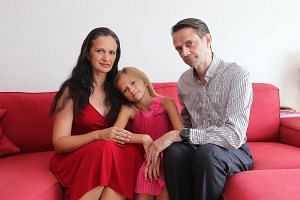 Drowning of schoolboy off East Coast Park: 'No lifesaver' but housewife's maternal instincts kicked in and she leapt

Despite their efforts, the last of the four boys, all Jurongville Secondary School students, drowned. The body of Muhammad Suhaimi Sabastian, 12, was found three hours later by the Singapore Civil Defence Force's (SCDF) Disaster Assistance and Rescue Team.

Yesterday, Mr Tan and Ms Hajas became the first recipients of the new Community Lifesaver Award (CLA) at an award ceremony held at the 2nd SCDF Division Headquarters in Tampines.

The CLA and the Community First Responder Award (CFRA) were rebranded this month from the Public Spiritedness Award, which was started in the early 1990s to acknowledge public acts of saving lives or property.

The CLA is presented to those whose actions involve an element of self-risk and who contribute in saving lives. The CFRA awards citizens for acts such as extinguishing a minor fire in a common area and helping to direct vehicles during a traffic accident.

The duo, who each received a medallion, a certificate and a collar pin for their efforts, yesterday recalled how they worked together.

"We didn't talk during the entire thing. We just went out together and brought that boy back," said Ms Hajas.

When asked how he felt about receiving the award, Mr Tan said: "I feel very honoured but it's really not a big deal. You just must know when to help someone."