SINGAPORE - A man who punched a Universal Studios stuntman, causing injuries that later killed him, had his jail and caning sentence reduced on appeal on Friday (May 11).

Waiter Muhammad Khalis Ramlee, 25, had been part of a group who went on a violent rampage in Boat Quay on Christmas Eve 2015 when he punched John Denly Nelson in the face, causing him to fall and hit his head on the curb.

The 30-year-old American suffered head injuries that ended his life a week later.

Last November, a district judge sentenced Khalis to 10 years' jail and 24 strokes of the cane on four charges - a count of causing grievous hurt charge, two of rioting for two other fights that night and one of drug consumption.

Khalis appealed to the High Court, claiming that the punishment was too harsh.

Chief Justice Sundaresh Menon reduced the sentence for the grievous hurt charge from seven years' jail and 12 strokes to 4½ years and eight strokes.

It brought his overall sentence down to 71/2 years' jail and 20 strokes. 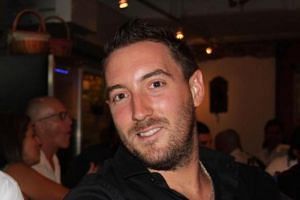 In his judgment, CJ Menon said the district judge had placed too much weight on the fact that Khalis was involved in other acts of violence earlier that night.

He noted that Khalis has been charged and is being punished for his role in two riots which were "sufficiently distinct" events.

"Although the blow was forceful, it was not part of a continuous or repeated attack; nor was it delivered as part of a group attack," he said.

Khalis and a group of friends had gone on a violent spree around the Boat Quay area between 2am and 3am on Dec 24 ,2015 .

A confrontation with a stranger outside a bar on Circular Road escalated into a group fight which was broken up by bar employees - but a second soon erupted.

As those fights calmed, a dispute took place between a friend of Khalis and a friend of Mr Nelson near a taxi stand.

Mr Nelson tried to intervene and was set upon by Khalis, who delivered a "lunging punch" from behind.

Although Khalis did not appeal against his conviction, he argued he had not intended Mr Nelson to lose consciousness, or to fall and fracture his skull.

CJ Menon said Khalis' arguments made it necessary for him to consider if he had been correctly convicted of causing grievous hurt, as it was a challenge as to whether the mental element of the offence had been made out.

He held that, to satisfy the mental element of causing grievous hurt, it must be shown that the accused intended or knew his actions were likely to cause grievous hurt. It did not matter if the accused in fact caused hurt that was not precisely the kind he had in mind.

From the evidence, CJ Menon concluded that Khalis did know at the time of delivering such a forceful punch that some sort of grievous hurt was likely to result. It was immaterial that Khalis may not have specifically intended the deceased to die, he added.