SINGAPORE - The man who robbed a Standard Chartered Bank branch in Holland Village has been nabbed in Thailand after more than 72 hours on the run, police confirmed on Monday (July 11).

The man was arrested by the Royal Thai Police in Bangkok on Sunday (July 10), police said in a statement.

According to Major General Apichart Suriboonya, who heads Thailand's Interpol unit, the suspect is Canadian. He flew from Singapore to Thailand last Thursday, arriving at 5.08pm. On Sunday, he was arrested at noon at Boxpackers Hostel in Bangkok.

Major General Apichart, who declined to name the suspect, says the Thai police cancelled his right to stay in Thailand after receiving an arrest warrant from Singapore authorities. He is now being detained at an immigration detention centre in Bangkok.

When Thai police questioned him, "he said nothing" and demanded to meet an officer from the Canadian embassy, Major General Apichart told ST. But it was not possible as it was a Sunday and the embassy was closed.

It is unclear whether an embassy officer has gotten in touch with him but Thai police are seeking to question him more, said the major general.

He was unable to say how long it would take to extradite the suspect, but added "I think it won't be long". Singapore sent the request to extradite him to the Thai embassy in Singapore on Friday night. This request needs to pass through Thailand's Ministry of Foreign Affairs, then to the Thai attorney-general's office first before being approved, he said.

On Thursday (July 7), the suspect had walked into the bank around 11.25am, handed the female teller a piece of paper with his demands and later fled on foot with about $30,000. 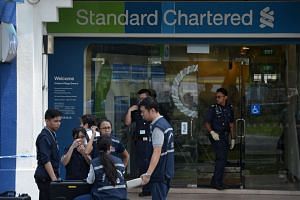 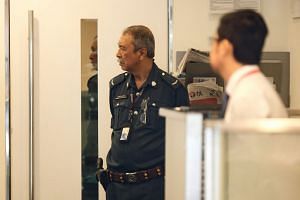 Chinese newspaper Shin Min Daily News reported that the note said: "This is a robbery, I have a weapon, give me money, don't call police."

The teller handed over the money for fear that the man would use his weapon. She then alerted the police shortly afterwards.

In a statement on its Facebook page, the police said that it managed to establish the identity of the suspect on the same day but he had already left Singapore for Bangkok, shortly after the crime was reported.

The StanChart branch did not have a security guard then, but a bank spokesman said it had "in-branch security measures" such as closed-circuit television cameras.

Further details beyond the initial police statements were not disclosed earlier to ensure that arrest operations were not jeopardised, police said.

"The Singapore authorities are currently engaging our counterparts in Thailand to see whether the suspect can be released into our custody," the police added.