Chia Kee Chen was found guilty of forcing the victim, 37-year-old material analyst Dexmon Chua Yizhi into the back of a borrowed van, together with Indonesian Febri Irwansyah Djatmiko, between Dec 28 and Dec 29, 2013.

“There is no doubt in my mind that Chia alone had the motive and intention to kill or cause grievous hurt to Dexmon,” said Justice Choo Han Teck in his judgment.

After assaulting the victim, they dumped him at a military live firing area in Lim Chu Kang. Chia later led police to the body.

An autopsy found that the victim died from injuries caused by blunt force trauma to his face and head that were so severe that almost every bone in his face was fractured.

Febri, 33, is still at large but had given a statement to Indonesian police about how Chia had roped him in to kill the victim. 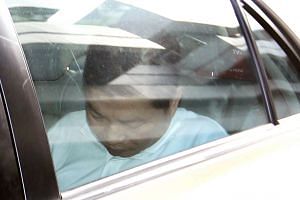 Another man involved in the crime, Chua Leong Aik, who drove the van but fled after he became frightened, is serving a five-year jail term for abduction and causing grievous hurt by dangerous means.

However, Chia said he had nothing to do with the killing and tried to pin the blame on a mysterious individual named “Ali”. His narrative also included an “Indian man” who acted as Ali’s messenger.

Chia also claimed that he had lain in wait for Mr Chua at a carpark near the younger man’s flat because he wanted to get back a thumbdrive containing a sex tape of his wife.

Chia’s account was rejected by High Court judge Choo, who called him an “unreliable witness”.

“There is absolutely no other evidence that persuade me that there may be a possibility that Ali and the Indian man might have been involved. Chia started a story which he had difficulty fabricating into a coherent whole,” said the judge.

The judge noted that Chia had contradicted himself “many times over”, was contradicted by the testimony of others and had given “incredible accounts”.

For instance, Chia had phoned his brother-in-law at about 3am on Dec 29 to seek his help to move a body. But Chia testified that the purpose of his call was to ask the market price of birds.

Sentencing for Chia has been adjourned to another day. He faces either the death penalty or life imprisonment.