A tribunal has decided a veteran lawyer must be dealt with by the Court of Three Judges for gross professional misconduct after someone he brought in to drum up the firm's conveyancing business turned out to be a conman and cheated 17 clients.

The Court of Three Judges is the highest disciplinary body to deal with lawyer misconduct.

In prosecuting him, the Law Society said Mr Troy Yeo, a lawyer of 35 years' standing, had failed to properly supervise Sim Tee Peng despite "red flags" that should have increasingly alerted Mr Yeo to "highly unconventional and questionable practices" adopted by Sim.

The tribunal, in its report released on Wednesday, found that the Law Society had made a compelling case for gross professional misconduct.

It said a duty of supervision is imposed to protect the public and to protect client monies against any misapplication.

Sim brought in the majority of the firm's conveyancing clients and interacted extensively with each of them. But he is not a lawyer and before meeting Mr Yeo, had worked as a paralegal in the conveyancing departments of other law firms. 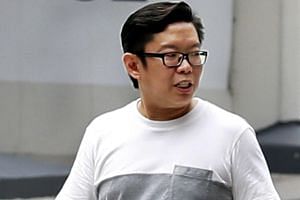 Serial cheat who posed as lawyer to scam victims of $1.8m sentenced to more than 7 years' jail

During his time at Mr Yeo's firm, Sim forged stamp duty certificates, passed himself off as a lawyer, and cheated and misappropriated monies belonging to the firm's clients. The tribunal said $448,000 was wrongfully deposited into the firm's office account, of which $336,000 was paid out to Sim without proper verification.

After Sim stopped dealing with the firm's clients, he went on to con the clients of three other law firms. Between June 2011 and September 2012, he cheated the property buyers of $1.8 million.

In 2016, he was jailed for 89 months for, among other charges, criminal misappropriation, creating counterfeit certificates of stamp duty and cheating.

"This is not a case of a one-off trivial or technical breach, but rather closer to a case of wilful and persistent default, given (Mr Yeo's) knowledge of Sim's unorthodox conduct and his failure to resolve and prevent even further breaches," said the tribunal in its report.

The tribunal, appointed by the Chief Justice, comprised Senior Counsel Edwin Tong, who is now Senior Minister of State for Law and Health, and lawyer Joy Tan Whei Mien.

Mr Yeo had admitted to two other charges that he breached lawyers' accounting rules in relation to conveyancing monies matters related to Sim.

In prosecuting the Law Society's case, lawyers Abraham Vergis and Lim Mingguan argued that Mr Yeo had breached the Legal Profession (Professional Misconduct) Rules 2010 in relation to the first charge of failing to exercise proper supervision over Sim.

Senior Counsel Kenneth Tan, who represented Mr Yeo, denied he had breached the rules as he had taken reasonable steps in response to Sim's illegal activities.

After a four-day hearing earlier this year, the tribunal found that the Law Society had made out a compelling case beyond reasonable doubt and that Mr Yeo was liable on the first charge.

"Although we express sympathy for the fact that (Mr Yeo) himself was a victim of Sim's fraud, in our view, a finding of liability for the first charge is inescapable," the tribunal added. It found the case to be of sufficient gravity to be referred to the Court of Three Judges, where he may be fined, suspended or struck off, if found guilty.

A version of this article appeared in the print edition of The Straits Times on September 28, 2018, with the headline 'Lawyer to face Court of 3 Judges for failing to check conman'. Subscribe
Topics:
More
Whatsapp Linkedin FB Messenger Telegram Reddit WeChat Pinterest Print Purchase Article Copy permalink