SINGAPORE - The Government has not removed or restricted prosecutorial discretion for Section 377A, Attorney-General Lucien Wong said in a statement released on Tuesday (Oct 2).

He noted that former A-Gs, Professor Walter Woon and Mr V. K. Rajah, "have recently suggested that it is not desirable for the Government and Parliament to direct the public prosecutor (PP) not to prosecute offences under Section 377A of the Penal Code, or to create the perception that they are doing so".

"Such comments may give rise to the inaccurate impression that the exercise of the PP's discretion has been removed or restricted in respect of Section 377A."

Mr Rajah had written a lengthy commentary published in last week's The Sunday Times on 377A while Prof Woon had posted a comment on the Ready4Repeal website.

A-G Wong added: "Where the Police conducts investigations into an offence under Section 377A, the Police will decide whether or not there is sufficient basis to refer the case to the PP.

"It will then be for the PP to determine whether to prosecute. In doing so, the PP exercises his independent discretion on whether to charge the offender, solely on the basis of his assessment of the facts, the law, and the public interest.

"While the PP is entitled to consider public policies in exercising his discretion, these do not fetter the exercise of prosecutorial discretion." 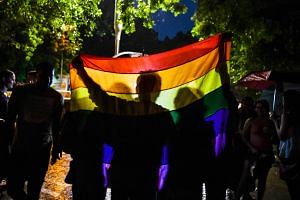 He also noted that "the Government's position on Section 377A is that the Police will not proactively enforce this provision, for instance by conducting enforcement raids".

"However, if there are reports lodged by persons of offences under Section 377A, for example, where minors are exploited and abused, the Police will investigate."

To illustrate this point, A-G Wong cited an example of when, in 2008, then Deputy Prime Minister and Minister for Home Affairs Wong Kan Seng "explained that in the case of an offender who had been charged under Section 377A of the Penal Code, a police report was lodged by a 16-year-old male who had oral sex with the suspect".

The police referred the case to the PP after completing investigations, A-G Wong said, and the PP "decided to charge the accused under Section 377A after taking into account all the facts and circumstances of the case, including the complainant's age and the fact that the offence had taken place in a public toilet".