The judge, who had been ill for sometime with a heart condition and was on dialysis, was 85.

He was appointed a judge of the Singapore High Court on Oct 1, 1978, and served until 1997. He was one of six justices on the Bench when appointed.

He was also a numismatist, a person who studies and collects currency, and served as chairman of the Third Singapore Note And Coin Advisory Committee in the Board of Commissioners of Currency Singapore for three years from 2005. 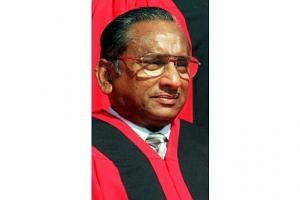 Justice Sinnathuray was awarded the Public Service Star by the President in the National Day Honours list in 2009.

Chief Justice Sundaresh Menon said: "We are deeply saddened by the news of the passing of Justice Sinnathuray, who served with distinction on the Supreme Court Bench for nearly two decades and presided over a number of important cases.

"He was a very popular Judge who always treated counsel with great courtesy. He loved the law and the legal fraternity and made it a point to attend many of our functions and events for so long as he was able to. Many of us on the Bench today remember him warmly as a good friend and colleague. We will miss him dearly.

"My colleagues and I extend our deepest condolences to his family and loved ones."

He said: "After having served in the Singapore Legal Service in various capacities for more than two decades, Justice Sinnathuray was appointed a Justice of the Supreme Court in 1978. During the course of his 19 years on the Supreme Court Bench, he presided over numerous landmark criminal trials including the notorious 'Toa Payoh ritual murders' and the 'body parts' murder involving Scripps. He will be warmly remembered by the legal community for his unfailing courtesy and his commonsense approach towards resolving knotty legal issues."

The wake will be held at Singapore Casket level 2, Diamond Room at Lavender Street from 4 pm tomorrow and the cortege will leave at 4 pm on Friday for a private cremation.

Justice Sinnathuray's 41-year-old daughter Shamona, a lawyer, said his family was with him during his final moments on Monday evening. "He was a great dad, always very encouraging and had the 'never give up spirit'."