Singapore Democratic Party (SDP) chief Chee Soon Juan has focused much of his firepower in his Bukit Batok by-election campaign on municipal issues - pledging to be a full-time MP, trotting out plans to show residents he is prepared to run their town council, and promising to continue with upgrading plans if he were elected.

But it is the mission of being an alternative voice in Parliament that most resonates with the opposition party leader.

As the final day of campaigning begins today, this is his pitch to residents: Vote him into Parliament and he will hold the Government to account.

This is his "comparative advantage", he said.

Asking difficult questions is something his opponent, People's Action Party (PAP) candidate Murali Pillai, has pledged to do as well. But Dr Chee is not convinced Mr Murali will live up to it. 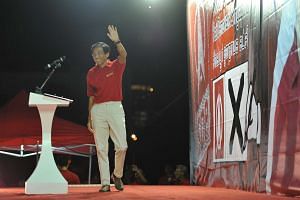 Chee Soon Juan told to clarify his position on immigration

He warned during his rallies that Mr Murali will merely be another cookie-cutter ruling party MP constrained by the PAP Whip.

But as SDP chief, he will be different, he said. "If we are in Parliament, that is where I think we can make that qualitative difference in there."

For too long, he said, ministers have been able to get away with "motherhood statements and things that do not really make a lot of sense".

"When you begin to point out where the flaws of their arguments are, I think that is where we begin to make progress."

His campaign slogan, Now Is The Time, captures this urgency he feels of electing an alternative voice into Parliament.

But for much of his campaign, he has focused on the municipal aspects of being an MP.

Perhaps recognising that local issues count in an ageing estate, where 96 per cent of dwellings are public housing, Dr Chee has devoted time during his rallies to explain how he will run a town council transparently and to extol the virtues of a full-time MP, which he wants to be.

His goal is to surpass the PAP at estate management.

"PAP says it is not so easy, but don't scare the people... it is not rocket science," he said of running town councils.

He added that rubbish bins will not overflow and estates will not become slums just because an opposition party has taken over.

Dr Chee also addressed the perceptions of him as a political nomad during an interview with The Straits Times.

In last September's General Election, he had professed his commitment to Holland-Bukit Timah residents when contesting in the group representation constituency (GRC).

But eight months later, he is standing in Bukit Batok in a by-election and telling residents his heart is with the single-member constituency (SMC). Dr Chee said it was his party's choice to field him.

Although he has left Holland- Bukit Timah, he said, and has not had time to hand over his work there, his party will "set in motion" its plans for the GRC as well as for Marsiling-Yew Tee GRC and Bukit Panjang SMC where it contested.

Asked if he intends to stay in Bukit Batok even if he is not elected, he said he could not say with certainty, given that boundaries can be redrawn.

He pointed to how Bukit Batok was an SMC until 1997, when it was drawn into a GRC.

"I want to say to the PAP: Don't take Bukit Batok, don't put it back into the GRC again," he said.

And should this be the case, will he stay?

A version of this article appeared in the print edition of The Straits Times on May 05, 2016, with the headline 'Chee's aim to be alternative voice in Parliament'. Subscribe
Topics:
More
Whatsapp Linkedin FB Messenger Telegram Reddit WeChat Pinterest Print Purchase Article Copy permalink