It is also in eighth position internationally, with London's Heathrow taking the top spot

For the second year running, Changi Airport has been named Asia's most connected international airport.

But globally, it dropped two notches down to eighth spot, with London's Heathrow Airport topping the chart, said industry consultancy OAG, which collates and analyses flight schedules, among other industry indicators.

In ranking the airports, OAG calculated the total number of all possible connections between inbound and outbound flights in a six-hour window on the busiest day for global aviation for the 12-month period that ended in July.

The ranking looked at all international flights to and from the airports.

OAG noted that five other airports in the Asia-Pacific are among the Top 20 most connected in the world. 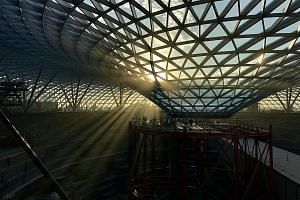 He said Asia's dominance is clear to see and there are likely to be some interesting movements when Beijing's new airport opens.

Experts say stiffer competition is in store for Changi, with airports in Asia embarking on ambitious plans.

On Sunday, the Nikkei Asian Review reported that Thailand is undertaking a major expansion that aims to more than double the passenger capacity of airports in and around Bangkok.

The country's Transport Minister Arkhom Termpittayapaisith was quoted as saying that the new U-Tapao airport, a former military air base south-east of Bangkok, will handle up to 60 million passengers a year once it is fully transformed into a civil airport.

The remake is expected to take 20 years.

Suvarnabhumi and Don Mueang international airports in Bangkok will also be expanded to reach annual capacities of 90 million and 40 million passengers, respectively, the minister added.

Currently, Suvarnabhumi's maximum capacity is 45 million passengers a year, and that for Don Mueang is 30 million.