SINGAPORE - Changi Airport gave a glimpse of Jewel, the new retail complex to open in 2019, in a video on Sunday (June 4).

The 2min video posted at 9am shows the latticed structure growing out of an empty plot in front of the traffic control tower.

Lush greenery sprouts and a waterfall cascades from the centre of the curved roof. Sunlight spills in from the glass walls and ceiling, and people walk on sky bridges surrounded by plants.

Earlier reports said that more than 9,600 pieces of glass, specially made in the United States, will frame the five-storey building's facade.

Highlights include a 40m indoor waterfall and a five-storey garden with about 2,500 trees and 100,000 shrubs from countries including Brazil, Australia, Thailand and the US.

Retail shops surround the verdant central courtyard and the waterfall lights up with colours in the evening as the video ends.

Reactions to the video were mainly positive. 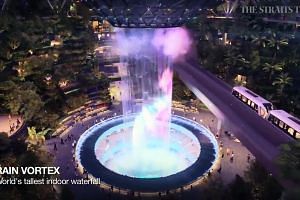 Changi's Jewel shaping up well for sparkling start in 2019

Said Facebook user Sunil Srivatsan: "Changi Airport never ceases to amaze! Who says that you can't improve upon perfection! Definitely my favourite airport, the kind of place where you secretly wish for flight delays just so you can savour the ambience a bit more!"

Directly connected to Terminal 1, Jewel will be linked to the other two terminals via air-conditioned bridges with travelators.

It is just one of the improvements to the airport. Terminal 4 is set to open in the second half of this year, while Terminal 5, which will eventually be bigger than T1, T2 and T3 combined, will open by the end of the next decade.