SINGAPORE - Transform a vacant power district into a massive concert hall to showcase local acts, an exhibition space, or even an indoor garden with vertical farms.

These are some ideas that architects, artists and tertiary students have in mind to rejuvenate the 15ha Pasir Panjang Power District, which currently houses two power stations, round oil tanks and ancillary buildings.

In late April, the Urban Redevelopment Authority (URA) and the Singapore Land Authority (SLA) launched a competition to seek creative ideas from the public to transform the heritage-rich power district into a waterfront destination along the Greater Southern Waterfront, which will extend from Pasir Panjang to Marina East.

Development will proceed in stages, starting with the power district in about five to 10 years.

About 60 potential competition participants signed up for a site visit to the precinct on Friday (May 10), to gain inspiration on converting the site into a place of work and play, while preserving the district's industrial heritage.

Visual artist Heman Chong, 42, has a vision of the district's main building, Power Station "A" - formerly housing turbines, a boiler hall and an old intercom system - to be turned into a concert hall for local performing arts groups.

"Theatre performances are suitable for this building because it has an incredibly high ceiling. Since the building is big, it may have interesting acoustics also," he added. Power Station A is about four storeys high. 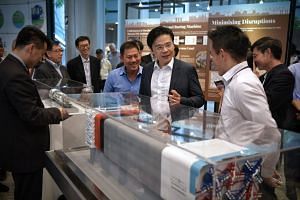 Underground substation to supply power to Labrador by 2025, as Singapore digs deeper

Since the power district is located along the coast and next to the Labrador Nature Reserve, Mr Chong added that it is possible to blend green spaces into the precinct.

He suggested a boardwalk be built along the coast that could extend to West Coast Park.

"With the boardwalk, SLA and URA could work with Singapore Sports Hub, for instance, to organise coastal marathons. Having a run while looking at the sea and feeling the breeze is a beautiful thing."

The power district was built during the 1950s and 1960s to supply the country's burgeoning power needs. It ceased operations in the 1980s and 1990s when cleaner, more advanced power stations such as Senoko and Pulau Seraya were built.

The power station buildings' exterior, made of red brick walls, is unique to the period's architecture and design.

The thick steel columns that almost extend to the ceiling, yellow-tinted windows and the old intercom systems symbolise the industrial heritage of Power Station A.

The participants of the competition are looking to propose ideas for the district that does not alter its structure and design, to preserve its heritage.

Mr Lim Yu Heng, 26, hopes to see Power Station A developed into an urban farm with a recreational garden for visitors.

"You can still create an urban farm without touching the building's architecture. It is also possible to synchronise history with the present."

"In the past, the power station staff lined up outside the building to collect their salaries. Perhaps at the same area, the urban farmers could collect their harvest," said the final-year architecture student at the National University of Singapore.

Mr Chong added: "I will propose as little changes to the area as possible. I wouldn't even paint over the arrow sign on the floor.

"I feel strongly that what we lack in Singapore is our layers of history, and we should allow this building to shine on its own. We don't have to clean up everything. Not everything has to look brand new."

Participants can choose from two main topics in the competition which will run until June 25.

The first topic - open to the public and tertiary students - requires participants to submit a master plan to develop the entire power district and the second topic seeks creative ideas to repurpose Power Station A while keeping in mind its industrial heritage.

Only architecturally-trained professionals and tertiary students can participate in the second topic.

Winners stand to receive up to $3,000. The winning proposals and other relevant submissions will be showcased in a public exhibition later this year.