Commemorative $20 notes sold out at many branches; listings up online at marked-up prices

The Monetary Authority of Singapore (MAS) said yesterday that the new $20 notes issued to commemorate Singapore's 200 years of history have seen strong demand from members of the public, and that limited quantities are still available at some banks.

Members of the public do not need to be customers of the bank to be able to exchange for the commemorative note over the counter.

Two million commemorative notes were made available at nine major retail banks here on Monday and were quickly sold out at many branches.

More than 400 new listings of the bill have since sprung up on online marketplaces at marked-up prices.

While many listings were priced between $25 and $40, some sellers wanted as much as $1,688 for just five notes.

One Carousell reseller, who did not wish to be named, said she decided to list a few of the bills for sale as she had many of them.

"Even if they are not sold, I will save them and give them to friends and family in red packets for special occasions," she said.

Many sellers were offering the notes with the folders in which they came, and listed the bills' serial numbers. 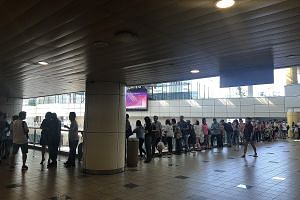 A check by The Straits Times found 10 listings for the note on eBay and more than 400 on Carousell.

The $20 notes were launched on Wednesday last week by President Halimah Yacob.

MAS, which issued the note, had capped the number of notes that each person was allowed to exchange at 20 per transaction.

When contacted, an MAS spokesman said that while the law does not prohibit a person from selling the notes online, "we encourage Singaporeans to collect the notes as keepsakes, as they are a one-off issue to commemorate Singapore's bicentennial".

Carousell said it encourages buyers to do their own research before purchasing any items, and not to proceed with a transaction if they feel uncomfortable at any point.

On the back of the bill are eight pioneers who made significant contributions to nation building.

His company specialises in auctioning and selling rare coins and banknotes.

"But since the supply is plentiful, there will usually not be an increase of more than 10 to 20 per cent in the resale price, eventually," he said, noting that many of the higher mark-ups for the new $20 bill may not find buyers now.

However, Mr Lee added that the serial numbers could help some notes command higher resale value.