SINGAPORE - A dolphin that was spotted entangled in a fishing line at Bedok Jetty last Saturday (April 7) has been freed in a rescue operation by the Animal Concerns Research & Education Society (Acres) that lasted more than an hour.

In a Facebook post on Tuesday, Acres shared a video of two people in the water helping the dolphin.

"After a one-hour rescue operation, we managed to remove all the netting which had fishing weights attached to it as well," said Acres in its Facebook post. "We removed a total of 8kg of fish net and line material."

Acres deputy chief executive Kalai Vanan told The Straits Times on Tuesday that he and an Acres volunteer went out to sea in a dinghy on Sunday afternoon after they received reports of dolphin sightings on Sunday.

Mr Kalai said he realised that the entanglement "was quite bad" after having a closer look. 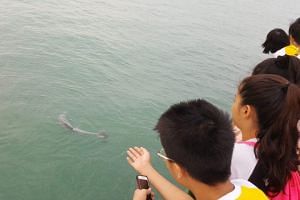 "We assessed the situation and realised we had to intervene," he said. "Because if we didn't intervene and it went out of sight shortly after, then we might not see it again and based on that scenario on Sunday it already looked very weak. So we felt the priority should be to remove the entanglement so it wouldn't be in such distress."

He stayed on the dinghy to guide his partner, who jumped into the water as the dolphin dived in and out.

"We managed to get a hold of it and guide it to shallower waters for a clearer picture," he said. "The entire entanglement was a big clump of fishing net, fishing lines, fishing weights, fishing hooks."

He said the dolphin had lacerations on its body, and they took a knife to cut the mass of nets away.

It was freed at about 2pm. Mr Kalai, along with his rescue partner, a volunteer with Acres for five to six years now, boarded a boat from the National Sailing Club to check on the dolphin.

"On Saturday and Sunday I'm pretty sure it was always in the shallow waters. But after we freed it, it dived in and reappeared much further down, about 50m out," he said.

Acres thanked the National Parks Board and the National Sailing Club, as well as those who alerted them to sightings of the dolphin.

The dolphin had been spotted at around 7.30am on Saturday, drawing a crowd of onlookers.

While it still appeared weak, it seemed to be moving quicker and "a bit more upright" after a while, Mr Kalai said. "It eventually went out of sight," he said.