SINGAPORE - A 19-year-old man has been arrested for stealing motorcycles in a series of cases around the island, the police said on Friday (Sept 22).

The thefts occurred in areas such as Clementi, Jurong, Marsiling and Yishun.

In one of the cases, a motorcycle was stolen from the open air carpark at Block 247, Yishun Avenue 9 on Tuesday (Sept 19).

After receiving the police report at 11.34pm, officers from Ang Mo Kio Police Division conducted investigations and arrested the suspect on Friday around 5.30pm near Yishun Avenue 11.

He is believed to be involved in several other cases of motorcycle thefts.

If convicted, he can be jailed for up to seven years and fined.

Just last month, a 41-year-old man was arrested for stealing a motorcycle in Tampines.

In that same month, a 19-year-old man was arrested for trying to steal a motorcycle in Yishun. 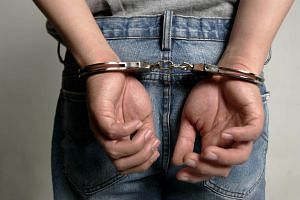 Two arrested for theft of motorcycles in separate incidents

He fled when stopped by a resident, but was later identified and arrested.

- Park your motorcycle in well-lit areas;

- Install an anti-theft alarm for your motorcycle;

- Use a motorcycle canvas to cover the motorcycle, securing both ends;

- Use additional locking devices such as disc brake locks or install a suspension guard; and

- Remove the ignition key and lock the motorcycle, whenever it is left unattended.