SINGAPORE - Water is a strategic issue and a matter of national security for Singapore, and must be priced fully, Minister for the Environment and Water Resources Masagos Zulkifli told Parliament on Wednesday (March 1).

Rising costs of producing water, the need to build and expand desalination, Newater and water reclamation plants, and climate change make it urgent to have the right price in place to moderate demand and build infrastructure for a secure water supply, he said.

Addressing the House about the hike in water prices for the first time since it was announced in the Budget last week, Mr Masagos laid out the reasoning behind the move to increase water prices by 30 per cent over two years.

"Even as we give targeted assistance to households, such as U-Save vouchers to help them pay for their utilities bills, we must price water correctly. The consumer must feel the price of water, realise how valuable and precious it is, every time he or she turns on the tap, right from the first drop," he said.

He also reminded members of the backdrop to the Government's last water price revision in 1997, when there were worries that the supply of water from Johor would be blocked and Singapore was just embarking on desalination to secure its water supply. Local reservoirs - apart from Marina Reservoir - had been almost fully developed, and Newater would only come later, in 2002. 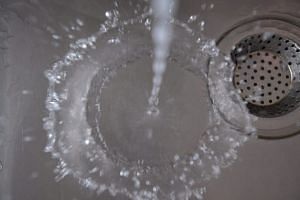 The Government then needed to register with Singaporeans the strategic importance of water, and the importance of saving every drop possible, he said.

Said Mr Masagos: "The Government decided to revise the water price substantially, to reflect its true scarcity value. If we needed any additional water, where would it come from? How much would that additional litre cost? That is what we call the 'long run marginal cost' (LRMC). That is the cost which consumers should see."

Desalination was costly: at $3 to $3.50 per cubic metre - a number that did not include the cost of pipelines, he noted.

There was no way for the government then to move the water price to the true cost of the next litre then - the price of desalination - so it was moved instead in steps, over the period 1997 to 2000, to today's water price.

Since then, water technology has progressed. PUB invested in research and development, giving rise to Newater - which was much cheaper than desalination. And desalination technology has advanced, from multistage flash distillation to membranes today.

"As a result, we have been able to keep down the cost of water, and to hold water prices unchanged for 17 years," said Mr Masagos. "But costs have gradually gone up. At some point, a price revision becomes essential."

He acknowleged MPs' concerns over the magnitude of the hike - 30 per cent - that has generated much discussion on the issue over the past week.

But Singaporeans should ask what this 30 per cent translates to in reality, he said.

He noted that 75 per cent of businesses will see a hike of less than $25 a month in water bills - or less than a dollar a day.

"Water will still be affordable. It will still remain within 1 per cent of household income," he said.

Cost of producing water has risen

Mr Masagos also gave three examples of how costs have gone up in the recent review.

First, more desalination plants will have to be built to increase Singapore's water supply any further.

The LRMC is a mix of Newater and deslination costs - but Singapore has to depend more on desalination for the next litre as water demand increases, because there is a limit to recycling used water in Newater plants.

Three desalination plants are in fact being built within the next three years, he said.

Second, as the country increases the proportion of used water being reclaimed for NEWater, effluent - or sewage - becomes more concentrated and more difficult and costly to treat.

And tunneling below the road to lay pipelines now costs two and a half times as much as the traditional method of laying pipes. As pipelines age, PUB has to more than double the rate of renewal for old pipelines from the current 20 km per year to 50 km per year to minimise pipe leaks and disruptions.

All these point to the need to update the LRMC - which the 30 per cent price increase has reflected, Mr Masagos said. However, he could not disclose details of the computation "because of commercial sensitivities".

"As more desalination, Newater and water reclamation plants are yet to be built or expanded, revealing the specifics of the LRMC could prejudice future bids," he said. "But rest assured that the LRMC reflects the best the market can offer."

Addressing a question raised by Workers' Party MP Pritam Singh (Aljunied GRC) on Tuesday on whether technology is taken into account in computing this cost, Mr Masagos said "technologically, we have squeezed everything we can from the current water processing technology". "It will take several more years to achieve the next breakthrough and bring it to a deployable scale," he added.

He also thanked members for raising the issue of the depletion of Johor's Linggiu Reservoir, a key source of water from the Johor River for Singapore, in recent years.

"Linggiu is operating today at a level way below what we are comfortable with, and it will take years to build up again to a reliable capacity," he said.

There is therefore an urgent need to have policies - including the right pricing - in place to moderate demand by both businesses and households, while building infrastructure needed for a secure water supply, Mr Masagos added.

"It is the job of my ministry and PUB to plan and build the infrastructure, which we will do, but it is only through right pricing that we can have everyone valuing water as a strategic resource and consciously conserving it," he said. "With the 30 per cent increase that we have announced, the price will be close to, though still slightly lower than, the price of the next drop or LRMC today. This is the best way to emphasise the scarcity value of water."