TAIPEI - Days after announcing her divorce, S.H.E singer Selina Jen said she jogged into the sunset, literally and happily.

In the post about the run on Facebook on Monday, she also thanked her family, her bandmates Hebe Tien and Ella Chen, and her soon-to-be ex-husband, lawyer Richard Chang, for their support.

Jen, 34, and Chang, 43, said last Friday they were ending their four-year marriage. She said they were "really unhappy as man and wife" because the problems that existed between them persisted, and the couple could not change themselves nor each other. 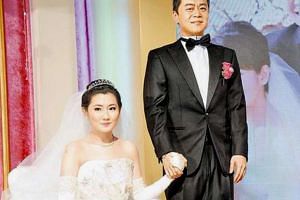 He said they had little in common as a couple, and would be happier as siblings. She is a connoisseur of food and travel, while he is a workaholic, he wrote. "She likes to watch variety shows and dramas. I am locked into news and sports channels. Slowly we became parallel lines."

On Monday, Jen said she went for her first jog in a long time to release stress and relax.

Although she was breathless and her feet were heavy at first, she kept running, till she jogged up a bridge and "I felt a burst of heat rushing out of my chest". Her stress and emotion seemed to be released, like stomach gas let out in a loud belch, she wrote.

The world looked brighter, and she started taking photos of the sunset, flowers and birds with her mobile phone, pictures that she also shared on Facebook.

"On the way home, my heart was full of gratitude. All the way, when I experienced different scenery in my life, my family, Hebe, Ella, my friends and Richard never let me face it alone."

She concluded: "I am a very lucky person. I will wear my battle dress and keep on running!"