Inspired by Philip K. Dick's 1962 alternate-history novel of the same name, The Man In The High Castle imagines a world where the Nazis and Imperial Japan won World War II and occupy the United States.

But to the surprise of its creators and stars, fans immediately seized on similarities between the fictionalised fascist America and the current swing to the right there and in other countries.

This may be one reason the series - the first two seasons of which are available on Amazon Prime Video in Singapore, with a third in the works - became the most popular Amazon original show shortly after it debuted in the US in 2015. 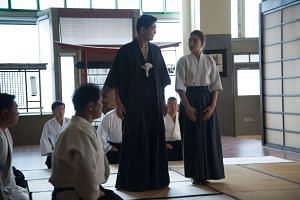 Speaking to a group of television critics in Los Angeles, Joel de la Fuente - who plays a Japanese military police inspector stationed in San Francisco - says: "I've been surprised by the vividness of people's experiences when watching the show and that when you're watching something that takes place in the past, in an alternative reality, the overwhelming response has been recognition that you're watching something that resonates in reality.

"So I think through the very specific circumstances of this show, we serve the present," says the 47-year-old Asian-American actor.

British co-star Rupert Evans, 40, plays one of several characters who stumble upon a set of mysterious newsreel films, created by someone called "the Man in the High Castle", which seem to show a parallel universe in which the Allies won.

"I live in London and my grandfather is of the age where they have a close recollection of World War II and for them, it's poignant," he says.

"Because although it is an alternative history, there is a plausibility to how close to reality this show is. If history had gone a different way, how that plays out in our show is interesting to a lot of people. I know some people have really connected with that."

Another theme that strikes a chord with fans is what happens when citizens do not resist authoritarianism.

De la Fuente says: "We're dealing with a world where, when big things happen and people don't speak up - you become complicit.

"We tend to take civil liberty for granted. When people become afraid, it's the first thing they want to give up. This is a look at what happens when you do give them up and how slippery that road is."

In the last few months, the show's creators say The Man In The High Castle evokes even more chilling parallels, given the normalisation of repression, racism and injustice in the US and elsewhere.

Shortly after Mr Donald Trump won the US presidency, Ms Isa Dick Hackett, an executive producer and Dick's daughter, told The Guardian newspaper that her father was "known for being vocal about needing to always be vigilant about fascism", so "it's interesting in the time that we're in, particularly hearing rhetoric that sounds fascist, that we're making this show".