SEOUL • Mandatory military service in South Korea can affect the career momentum of an up-and-coming artist. This may explain why actor Park Bo-gum has expressed his desire to enlist early.

The 25-year-old has chalked up impressive victories in the battle to win over fans in show business.

He will meet 50,000 more fans when he makes stops in countries, including Japan, Thailand, Indonesia and Malaysia.

His appearance in Singapore is slated for March 9 at The Star Theatre. Tickets from $158 to $228 are available from Apactix.

The attendance tally is an impressive coup, given that he made his breakthrough a few years ago playing a gifted Go player in the hit TV series Reply 1988, which aired from late 2015 to early 2016.

He followed that up with the 2016 period romance drama, Love In The Moonlight, which led to his becoming the youngest artist to be named Actor of the Year by Gallup Korea. 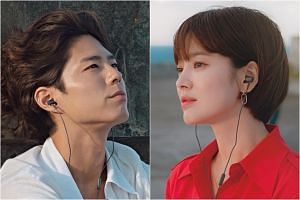 In Encounter, he co-stars with Song Hye-kyo of 2016 mega-hit Descendants Of The Sun fame.

But Park is not consumed entirely by the mission to be more famous.

According to lifestyle portal Soompi, he said: "I want to do a lot of work to enhance my value and invest a lot of time in the people I love. Travelling alone is not bad either. It would be fun to meet Koreans in an unfamiliar place.

"I would also like to get a scuba diving certificate."