In January this year, toymaker Mattel, known for its Barbie dolls, announced that it was creating a toy line inspired by the South Korean boyband.

On Monday (March 25), it finally revealed pictures of the dolls on Twitter to a mixed response.

The California-based manufacturer teased group and individual shots of the dolls, styled in the clothes worn by BTS in their Idol music video, which was released last August.

The dolls are the first in the line of the BTS x Mattel collection, which is expected to include collectables such as figurines and role-playing items, according to lifestyle portal Soompi. Retail information on the products have yet to be announced.

The seven-member boyband will also feature on a special UNO card game release, according to a tweet by the official UNO account. No official release date for the Mattel card game tie-up was provided.

The army of BTS fans have been discussing the design of the dolls online, with several Twitter users expressing their disappointment at the final product. 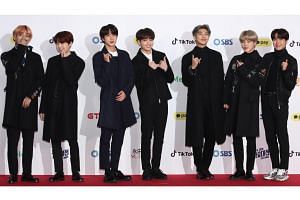 Twitter user @joonbgtan said that while the dolls do not look bad, they do not look like BTS.

"I think we were expected a little too much since the teaser pictures looked good," the Twitter user added.

Fans of BTS member Kim Tae-hyung, also known as V, have been especially vocal, as many fans said his figurine was a poor reproduction of the singer's likeness.

"How do all the other dolls look somewhat good then there's just Tae... like how do you mess up this bad," Twitter user @multisfeed said.

However, not all the reactions were negative, as some fans tweeted to Mattel thanking them for the time and effort taken to make the dolls.

Twitter user @jessst0691 tweeted: "Thank you for all the opportunities & offers you have for both BTS & Army!"

Dear @Mattel
Thank you so much for your hard work. We really appreciate that you spent time & effort on making @BTS_twt’s dolls. 💜💜
Thank you for all the opportunities & offers you have for both BTS & Army!#BTSDollsOfficial#BTSxMattel

BTS fans are often referred to as the Army.

While the dolls may not be exact replicas of the South Korean superstars, Mattel's attention to detail has been praised by fans.

The teaser photo for member RM's doll, which was released on March 19, highlighted the singer's left dimple, which has spurred fans to dub his doll a must-buy.