Jerry Yan was caught by surprise, asking: "Is it real?"

That was his response after journalists told him that Taiwanese model-actress Lin Chi-ling, 44, with whom he had an on-off relationship for 17 years, announced her marriage to Akira, 37, on June 6.

Apple Daily reported that after he was told that both Lin and Akira, a member of Japanese boyband Exile, had posted the news, Yan, 42, who was filming in Beijing, was in no mood to say more, simply stating: "I truly wish her happiness."

But he has not completely accepted the fact that his relationship with Lin is over, it seems.

He and Lin started dating in 2000 but broke up six years later.

When Yan, a member of now-defunct Taiwan boyband F4 was spotted at the airport, he wore all black and looked glum, barely bothering to acknowledge the fans who greeted him.

His fans, who had long hoped that he and Lin could tie the knot, were also disappointed over the turn of events. 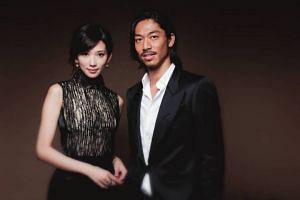 Worse, a day before Lin's marriage announcement, their hopes had been rekindled after Yan's former girlfriend, model Seanna Chang, revealed that he told her that Lin was the only woman in his heart.

Chang, who dated Yan for two years, added that she told him to keep on pursuing Lin, and fans in 2017 were encouraged when Yan and Lin were spotted at a hotel in Kuala Lumpur.

Other fans noted that the other members of F4 - Vic Chou, Ken Chu and Van Ness Wu - were also not able to settle down with the women who they had dated for relatively long spells, according to the hket portal.

Chou and actress Barbie Hsu were once an item. So were actress Kelly Lin and Chu, and actress Vivian Hsu and Wu.

There is also talk that Yan botched his chances by not sending a note he drafted to Lin over their hot-cold relationship.

"I was not good enough, not mature enough... Since we broke up, I haven't stopped crying in front of my friends," he apparently wrote.

Lin, in her post announcing her marriage, said she has "always believed that if I believe in love, love will one day reward me", noting that she had gone through "many falls, twists and turns".

But she added: "I'm married! I hope that everyone of you who believes in love will find a happiness that belongs to you."

Is that a hint to Yan to now forget about her totally and give his heart to someone else?