NEW YORK (NYTIMES) - A lawyer for Harvey Weinstein told the jury during closing arguments at his rape trial on Thursday (Feb 13) that Weinstein was the victim of an "overzealous prosecution" and seemed to blame the women who came forward to accuse him of sexual assault for not taking responsibility for their own behaviour.

The lawyer, Donna Rotunno, opened her remarks by assailing prosecutors from the Manhattan District Attorney's Office for weaving "a sinister tale" during the trial, one that depicted Weinstein as a villain and his accusers as innocent victims, devoid of both "autonomy" and "common sense."

She argued that his accusers had, in fact, made choices and engaged in consensual and often transactional relationships with him.

"In their universe," Rotunno said, "women are not responsible for the parties they attend, the men they flirt with, the hotel room invitations, the plane tickets they expect, the jobs they hope to obtain.

"They aren't even responsible for sitting at their computers and sending an email across the country," she added.

"In this script, the powerful man is so unattractive and large that no woman would ever want to sleep with him voluntarily."

Rotunno's arguments came as the monthlong trial was winding down. She implored the jury not to give in to public pressure, but to focus on the facts that were presented.

"You don't have to like Mr Weinstein - this is not a popularity contest," Rotunno said, adding moments later: "If you look at the evidence alone, they lose."

Weinstein, 67, a former powerhouse producer in Hollywood who made the films Pulp Fiction and Shakespeare In Love, has been on trial in state Supreme Court in Manhattan for the last month. 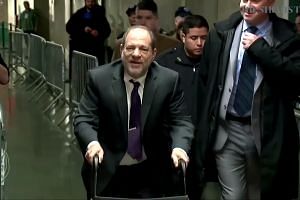 He has pleaded not guilty to five felony charges, including rape, criminal sexual assault and predatory sexual assault. If convicted on the predatory assault charge, he would face up to life in prison.

In all, six women took the stand during the trial and testified that Weinstein sexually assaulted them, though he faces charges based on the allegations of only two of them: Jessica Mann, a former actress who said he raped her in 2013, and Miriam Haley, a former production assistant who said he forced oral sex on her in 2006.

The jury of seven men and five women will begin deliberating on Tuesday.