Mr Kennie Ting, 39, group director of museums at the National Heritage Board, suggests that we meet at the Armenian Church in Hill Street - a curious location for an interview that is neither about the church nor the Armenian community.

But when we meet on a rainy afternoon last month, he explains that the church, which he visits on occasion, though he is not religious, is his "quiet and tranquil oasis" in a bustling city.

"I love going to places where a palpable sense of history oozes from the topsoil. It links me to other cities," says the avid traveller and history buff, who is able to wax lyrical about every aspect of a city from its churches and ports to its sidewalks and street lamps.

Chat long enough with Mr Ting and the word "city" will undoubtedly come up (seven times in the first 10 minutes of this interview).

He has been to 45 cities in China, Japan, India and South-east Asia as part of his research for his books - one published and two in the works - and he travels often to major Western cities for his work as the director of the Asian Civilisations Museum (ACM).

"I love cities, travel, history and heritage thrown into the mix," says the self-confessed "wandering cityophile and pattern finder".

As the director of the ACM at Empress Place - a post he took on in September last year - he has injected his love of cities and travel into the museum.

I feel very deeply about pursuing and exploring the idea of the linkages and connections in Asia and among Asia and the rest of the world because, in some way, that kind of explains who we are.

MR KENNIE TING, group director of museums at the National Heritage Board and director of the Asian Civilisations Museum

Over the first year of his directorship, he says, one of his aims was for ACM exhibitions to have "a component of life in the city", to make it relevant to visitors.

The two exhibitions before that were Cities & Kings: Ancient Treasures From Myanmar and Port Cities: Multicultural Emporiums Of Asia, 1500-1900.

These exhibitions were planned before Mr Ting came on board, but "I tweaked the design and the title because I get to make a final decision", he says cheekily but with authority.

Coincidentally, the port cities exhibition was right up Mr Ting's alley as he had authored a book titled The Romance Of The Grand Tour: 100 Years Of Travel In South-east Asia, which featured port cities such as Singapore, Penang, Yangon and Hong Kong.

The book started as an independent project in mid-2012, before he had started working at the National Heritage Board.

He made it a point to blog once a month about a different city and a friend later encouraged him to submit his writing to a publisher.

After numerous rejections, he got the book deal in 2013.

His city wanderings are not without aim.

"A lot of it was driven by wanting to understand myself - us - what is it that makes us who we are," says the bachelor.

"I don't feel that I necessarily find the answer in traditional Chinese, Indian or Malay culture," he says.

Instead, it is the links and connections among people, cultures and cities that have been more illuminating, he says.

This need to make connections among things also seems to mesh seamlessly with what the ACM is trying to achieve.

In the last few years, he says, the museum has been moving away from looking at regions of Asia in isolation and putting them in "boxes".

Instead, "we want to pursue and explore the linkages and connections within Asia and between Asia and the rest of the world".

"In some way, that provides a better explanation of who we are," says Mr Ting, who takes groups, including school groups, around the museum two to three times a week.

"Ultimately, the mission of the museum has to tie up with our own search for self - who we are, which I just happen to be searching for."

Mr Ting, the older of two children, believes his fascination with travel was probably prompted by his parents.

He remembers they had once gone on a trip to Alaska and came back laden with "amazing alien gifts" such as walrus tusks and furs - which he admits might not be politically correct these days.

"My friends would find it so interesting that I had all this stuff," he says.

His business consultant father Andy Ting, 66, was an army officer back then and often travelled for work. His mother Helen Ong, 65, is in banking.

An avid reader in his youth, Mr Ting read everything from literature to fantasy to history in his thirst to find out more about the world.

His younger brother Edwin, 36, who works with hotel-booking site Agoda and lives in Shanghai, says: "Even if the roof fell, Kennie would not have looked up from his book. That sums up the depth of his passion for reading.

"Wherever we went as a family, he would have a book in hand."

Mr Ting says that he read "with the view of flights of fantasy" and knew he wanted to travel when he grew up.

But it was not till his university days that he gained a greater appreciation for cities and urban life.

Of his Berkeley professor, whose classes would overflow with students, he says: "I can still remember the rising and swelling of his voice and the fire in his eyes when he spoke."

"We spent a whole week talking about magic and shamanism in cities," he says, his voice filled with nostalgia.

He was on a Public Service Commission Overseas Merit scholarship for his undergraduate degree and paid for his master's degree, after working for six years at the Ministry of Information, Communication and the Arts, where his last position was in arts and heritage development.

After his master's, he felt he needed some time overseas on his own to wander and find himself, which lead to 11/2 years of travelling and bunking with friends. He spent most of this time in the United Kingdom and New York City, in the United States.

"I took time out till I ran out of money," he says matter-of-factly.

While he was living in New York, he embarked on a project titled 100 Ways To See... A Street, a study of the 15 blocks he would walk from his friend's home in Brooklyn, New York, to the nearest supermarket.

"I gave myself the challenge: I'm going to break down this one street into 100 different things," he says.

His focus meandered from manhole covers and murals to bricks and fire escapes.

He adds with growing excitement: "I like the idea of the city being fractal. There are microcosms of universes within the city and within this street and this small spot."

When that project ended, he moved on to multiple streets.

"From the street, I wanted to look at Manhattan. I chose 12 streets that I felt were spread out across Manhattan, so you get a sense of the different kinds of neighbourhoods you have in the island.

"I walked for hours in the streets and I photographed very menial things," he says.

Just from the titles of these projects, it is obvious Mr Ting loves lists and he admits that is due to the obsessive-compulsive side of him.

"You have to be obsessive-compulsive to be doing these things, to be writing, to be a museum director."

Mr Kelvin Ang, 45, director of conservation management at the Urban Redevelopment Authority, a colleague and friend of Mr Ting's, says: "I don't know how he multi-tasks the way he does - finding the time to think about writing and writing down all the minutiae he observes in the cities that he visits.

"Kennie is also a person who always looks on the positive side of life and, in every situation, he will always think of possibilities rather than constraints. Maybe this is why he always discovers interesting new things about everywhere he goes," he adds.

This November, Mr Ting, who speaks French, Mandarin and some Japanese, will chair the Asia- Europe Museum Network, which includes the world's major museums such as the UK's British Museum and Sweden's National Museums of World Cultures.

"It's a bit scary," he says, but as the chair, he hopes to make South-east Asian the focus.

"We have to return to fundamentals, look at our collections and build dialogue between Asia and Europe. There are many stories and a lot of unfinished business there," he says.

On the local front, he hopes to continue his work in making the museum an "everyday place" where people can just "come, hang out and have a chat".

He started a traditional arts programme by the river this year to "activate the riverfront in a meaningful way".

"The music would waft over to the other side of Boat Quay. It's as if we were saying, 'Excuse me, can you come over here?'" he says, gesturing at nonchalant office crowds in his mind's eye.

As for his plans for the ACM?

Mr Ting's eyes light up when he talks about his hopes for an exhibition on the Manila Galleon trade - trade among Asia, Mexico and Spain - in the near future.

"For 250 years, they took the treasures of the East to Mexico and onwards to Spain... The porcelain there all came from Asia. So for ACM, while our scope is Asia, it is actually - the way we scope it - the world," he says emphatically. 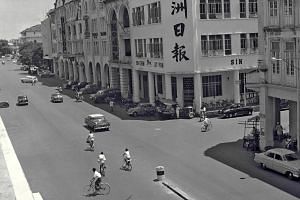 He takes the same view of Singapore heritage, arguing that there is much more to it than meets the eye.

"If you look at Singapore as a multi-cultural cosmopolitan trading city, our heritage goes back millennia," he says.

"Singapore's heritage is just as valid as any other country's heritage and, just as long I believe, we just have to find the right frame."

For Mr Kennie Ting's local version of 100 Ways To See... A Street, go to http://str.sg/4DKu. Titled Singapore In 12 Streets, it is a collaboration with The Straits Times.

A version of this article appeared in the print edition of The Straits Times on July 31, 2017, with the headline 'Voice for the city'. Subscribe
Topics:
More
Whatsapp Linkedin FB Messenger Telegram Reddit WeChat Pinterest Print Purchase Article Copy permalink